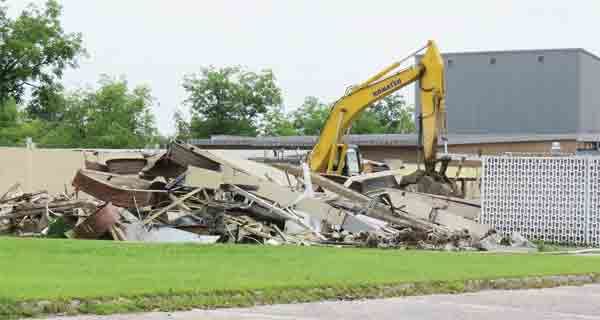 Walls cam down Monday as demolition began in the first phase of work planned on the campus at T.R. Miller High School. Once debris is removed, construction can begin.

The walls of the school lunchroom are no longer standing on the campus of T.R. Miller High School.
On Monday, workers with Maverick Demolition began taking down the building in preparation for new construction set at the campus later this summer.
“We have taken down everything that is coming down right now,” Maverick employee Roy Delacruz said Tuesday. “We will be cleaning up the debris and hauling it off now. It could take a week or so to get that part of the job done.”
Once the debris removal is complete, construction workers will have a clean slate available to create a new lunchroom and new classrooms and a computer lab at the facility, school officials said.
Previously, Superintendent Lynn Smith said the work on the first phase of construction at the school could be completed by June of 2014.
“The demolition has to be completed before students come back to campus in the fall,” Smith has said. “This will be a much larger facility.”
Other phases of the construction process will fall in line once the initial phase is complete. The complete renovation and restructuring of the school will ultimately include new administration offices, classrooms, lunchroom and computer lab. The current band room, gymnasium and science classrooms — all built within the last 15 years — will remain intact at the school, Smith said.
First Team construction, an Auburn-based firm, is expected to begin the construction of the new facility by the first of next month, Smith said.
The work planned on the campus is expected to cost just under $10 million according to previous reports.
The project may exceed the $9,751,000 bid on the project, Smith said, if change orders are needed during the construction phase of the project.
Funding for the project is being made possible through a loan at Trustmark bank, Smith said.