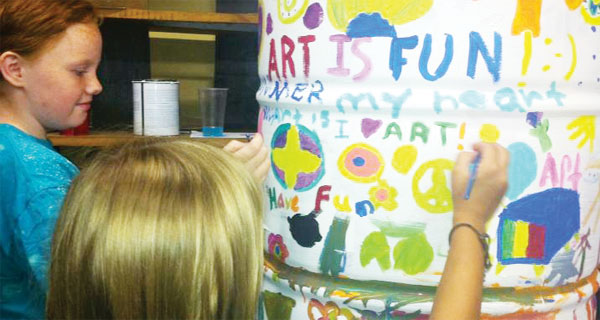 Leave your house. Know your neighbor. Pick up litter.
They are three simple ideas that Brewton Director of Program Management Connie Baggett believes can help bring the community together.
And they are just the first steps in a nine-month plan called “Brewton Reborn,” which aims to use simple ideas each month to help improve the community.
“You can’t stop a unified town,” Baggett said.
Starting in July, the city will deploy colorful trash barrels throughout town to help remind residents of the need to pick up litter. Those barrels, painted by volunteers and sponsored by businesses, groups and individuals, are a visible sign of what needs to be done.
“We’ve become numb to (the litter),” Baggett said. “People who come to our town see our cobwebs. So we tried to come up with something to bring our attention to it.”
The barrels — which Baggett said are really public art — are a good way to launch the Brewton Reborn campaign.
“If everybody in town would just pick up a couple of pieces of litter every day — it’s all of our responsibility,” she said.
Ideas for the Brewton Reborn campaign were planted when Baggett attended a Your Town conference earlier this year and sat in on a session about how to build community. Later, a group of Brewton residents gathered to share ideas as part of the recertification for the city’s Alabama Communities of Excellence designation, which generated more ideas, she said.
July’s activities are leave your house, know your neighbors and pick up litter.
Each month will have three ideas to help get residents more involved with the community and with each other, while also working to beautify the city.
Upcoming ideas include: planting flowers; using the library, which could include a city-wide book club; holding block parties; and buying from local merchants. Activities could include a potluck, kickball tournament and park events. One month will even focus on sharing stories, with young people encouraged to collect oral histories from their elders.
The idea, Baggett said, is to keep things simple — and low cost.
“The goal is to come nine months later to a more unified city,” she said, “with clear ideas about where we want to go. And I want it to be fun to live in Brewton. Everyone in Brewton has something to contribute, and I want to provide avenues for that to happen.”
The ideas can be a way to spark change in the community — and help attract more people to Brewton.
“We want to make this the kind of town that makes people say, ‘Wow, I want to live there,'” Baggett said.