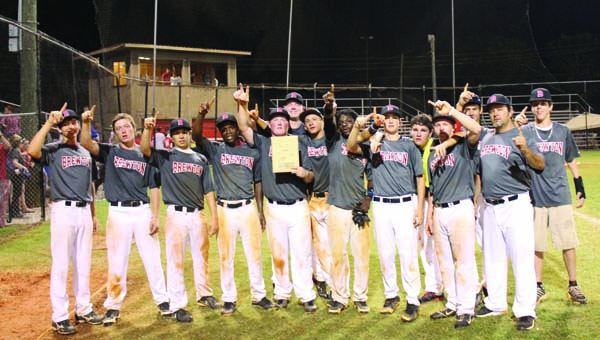 The bats were busy in a back-and-forth game in Brewton on Sunday and when the dust cleared Brewton’s 15-year-old Babe Ruth team had a 12-11 win over Monroe in eight innings—the second straight extra inning game between the two teams—to claim the district title.
The teams totaled 21 hits—14 from Brewton and seven from Monroe—including eight extra base hits in the game.
The game was back-and-forth heading into the eighth inning, with seven lead changes.
Tied 11-11 after the seventh inning, Brewton finally managed to grab the lead after a strong eighth inning Lane Chavers scored on a two-out game-winning hit by Derrick Barton to give Brewton the one-run win. Chavers reached on a walk earlier in the inning.
Brewton jumped out to an early 6-0 lead after two innings but saw Monroe take a 7-6 lead in the top of the third. After Brewton tied the game at 7-all in the third, Brewton scored three runs in the fourth to grab a 10-7 lead. Leading by three, Monroe scored one run in the fifth and three in the sixth to take an 11-10 lead. Brewton was able to tie the game at 11-all in the bottom of the seventh before grabbing the win in the eighth inning.
Brewton’s Tripp Floyd showed his talents on both sides of the diamond with a strong game on the rubber and at the plate.
Floyd racked up three RBIs on three hits for Brewton as he singled in the first inning and doubled in the second and fourth innings.
Floyd shut down Monroe while he was on the mound as he held Monroe hitless over two innings and allowed no earned runs, walked none and struck out three.
Chavers, Jared Cooper and Tim McDonald also pitched for Brewton with Floyd. Combined, the quartet of pitchers allowed seven hits, 11 runs, three earned, walked five and struck out six.
At the plate for Brewton, Dakota Graves was 2-for-5 with one RBI and Floyd was 3-for-4 with two doubles and three RBIs. Colton Morris was 1-for-4 and Chavers was 2-for-4 with a double and one RBI. Cooper was 3-for-5 with two doubles and one RBI while Barton was 2-for-5 with the game-winning RBI. Jake Najor had one RBI in the win.
The win for Brewton advances them to the state tournament slated to begin next week in Andalusia at LBW Community College. No tournament information was known as of press time.
Teams split first two games:
In their games against each other Friday and Saturday, the Brewton and Monroe 15-year-old all-stars split to force a third and deciding game. The game was set to be played later in the day Saturday, but weather conditions in the area forced the championship game to Sunday.
In game one Friday–a game that was continued Saturday with Brewton leading 8-2 in the seventh inning with two outs—Brewton took down Monroe 8-3 to take a 1-0 lead in the best-of-three series. After the resumed game two Saturday, Brewton and Monroe played nine innings immediately after game one and Monroe rallied to stun Brewton with a 12-11 win to even the series at 1-1 and force a deciding third game.
Friday: Brewton 8, Monroe 3
After having to wait more than 18 hours to officially record the final out of Friday’s game Saturday afternoon, the Brewton 15s defeated Monroe 8-3.
Tripp Floyd kept Monroe off the scoreboard until the sixth and seventh inning as he went 6 2/3 innings and allowed six hits, three runs, walked none and struck out nine. Jared Cooper went the final 1/3 of the game Saturday and allowed two hits and struck out one.
After being held scoreless the first two innings, Brewton plated one run in the third, one in the fourth and fifth and three more in the sixth inning to get the win by five.
At the plate for Brewton—who had 13 hits in the win—Dakota Graves, Malcolm Hawthorne, Jake Najor and Brooks Brown all had singles in the win.
Floyd had two singles and a double and Tim McDonald had a single and a double. Cooper had one RBI and Lane Chavers had a double, a triple and two RBIs.
Colton Morris added a triple and Derrick Barton had two singles and one RBI.
Saturday: Monroe 12,
Brewton 11 (nine innings)
Leading 10-5 after the top of the sixth inning, Monroe outscored Brewton 6-1 the rest of the way to tie the game at 11-11 to send the game into extra innings and eventually win by a score of 12-11 in the bottom of the ninth inning.
Monroe used five pitchers to get the win while Brewton used three in the loss.
Cooper, Morris and McDonald all pitched in the loss with McDonald being the pitcher of record.
The trio allowed nine hits, 12 runs, walked four, struck out six and hit five batters.
At the plate for Brewton, the all-stars pounded out 13 hits. Leading the way was Malcolm Hawthorne who had two singles and two doubles and one RBI. Floyd followed with two doubles and two RBIs while Graves had two singles and two RBIs.
McDonald added an RBI and Chavers had two singles. Jake Najor, Morris and Brown had a single each with Morris having one RBI.