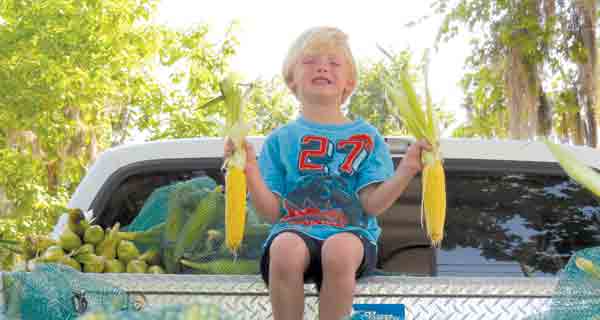 Trusten Barrentine, above, shows off the homegrown corn raised by his mom and dad, Matt and Brandy Barrentine. The family brings their vegetables to a site near Murder Creek as soon after picking as possible. A more permanent farmers market is in development for area farmers.

Bushels of corn, bins of okra and tomatoes, and watermelons ready to be thumped all can be found under the big trees next to Murder Creek. But city officials are working on a plan to have a more accessible spot for the local farmers to sell their wares.
During a series of town meetings that began in April to make future plans for the city, a farmer’s market was among the topics of discussion.
Connie Baggett, Brewton’s program manager, said plans are in the works for a permanent farmer’s market. “We are still looking for grant funding to build a structure for a farmer’s market,” Baggett said. “We would like to have a place for vendors to back their trucks under for sales. However, because of the flood issues at the park, it’s tricky to get that approved at Burnt Corn Park. But, we do have people working on that development.”
In the meantime, Baggett said growers will be invited to bring in their vegetables to a once-a-month tent farmer’s market set to begin in the coming weeks.
“We are making arrangements to have a tented farmer’s market in the park sometime in the next couple or three weeks,” Baggett said. “We will be selling spaces only for certified growers in our area. Those growing in our area can come and get a space at the tent market to sell plants, produce and even maybe some baked goods at the farmer’s market.”
Raymond Burch sat under the big trees by the creek Monday with bins of okra and tomatoes hoping to get a spot in a farmer’s market soon.
“I’ve heard about plans for a farmer’s market,” Burch said. “We talked about it at church and it sure would be nice.”
Burch, and countless other local growers, make their way to the Murder Creek spot that’s become a fresh market of sorts for Brewton and East Brewton. The only covering in the location is the shade of the huge trees that line the perimeter of the space and the occasional awning erected by some of the farmers.
Baggett said the temporary tent market will require farmers to provide their own 10×10 white tent to set up in the area of the park facing St. Nicholas Avenue when the tent market events begin.
Until the plans are complete for a permanent or even temporary market is complete, local growers continue to gather in the familiar spot for those looking for fresh vegetables and fruits throughout the year.
This week at the farmer’s spot, Matt and Brandy Barrentine were there with their best salesman, Trusten — a four-year-old farmer.
“This is our first year out here,” Brandy said. “We just wanted to get into farming and want to get into it more and more. This is a great place for us to sell what we’ve grown.”
The Barrentines offered up bushels and bushels of white and yellow corn this week — all grown on their little acre of land.
“We planted about an acre of corn and a half acre of peas,” Matt said. “We irrigated things to make sure we didn’t lose what we planted. This is our first year and it’s going well.”
The Barrentines had made previous stops at the site as they joined other growers like Bully and Herbert Nelson.
“We’re down here very day that we have something to sell,” Bully said. “We usually have okra, tomatoes, squash and watermelons. We also have something nobody else down here is going to have. We have the Quincy tomatoes. That kind of tomato is treated to prevent spotty wilt that gets tomatoes all around here.”
Raymond Burch also said the little farm he and his wife Sonya work provides vegetables for the family and enough to sell to others.
“I’m down here pretty much every day during the season,” Burch said. “We grow corn, peas, squash and peppers. We plant about an acre and it does well for us.”
Brett Chancery and his 2-year-old daughter, Anna, were at the bridge Monday with a small truckload of watermelons for sale.
“We’re down here helping out today,” Chancery said. “My father-in-law has gone after another load of melons and we’re just finishing up on the last load for him.”
Farmers will continue to gather underneath the shade trees beside Murder Creek until plans are finalized on the tent market in the coming weeks.
To learn more about the tent farmer’s market and how to sell wares at the location at Jennings Park (Burnt Corn Park), contact Baggett at 809-1777.