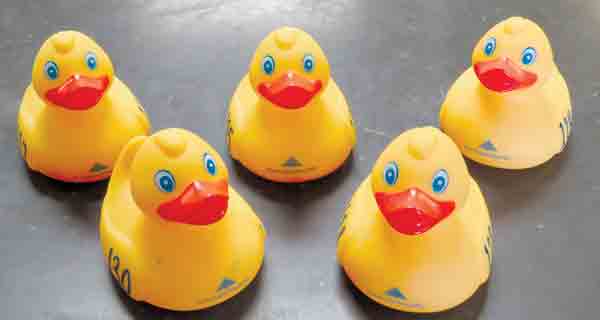 A new covey of ducks will be charging downstream in Murder Creek Thursday evening — thanks to a donation from Brewton’s Georgia-Pacific mill.
The annual duck race is held in conjunction with the July 4th celebration at East Brewton’s Fort Crawford Park.
East Brewton City Clerk Karen Singleton said the new batch of ducks will be a spectacular sight as they are set to run downstream in the race.
“It’s going to be pretty to see all those little yellow ducks coming down stream,” Singleton said. “All of the ducks will be the same color and size. It should be an interesting race this year.”
The new ducks — which look like a child’s rubber bath toy — were purchased and delivered by GP officials, Singleton said.
“We have had some wonderful contributions this year to make the celebration fun for everyone,” Singleton said. “We’re thankful for the new ducks.”
Singleton said city employees have been busy preparing the 500 new ducks for the race down Murder Creek.
“We have put numbers on each of the ducks so we can identify the winner of the race,” Singleton said. “We’ve made them ready to take a swim.”
The duck race is set to begin at 6 p.m. and can be viewed from the bluffs along Murder Creek at Fort Crawford Park.
The duck race is only one aspect of the daylong celebration planned in East Brewton.
A spades tournament will begin at 9 a.m. in the East Brewton Civic Center and will be followed with bingo games at 1 p.m. A horseshoe tournament begins at 4 p.m. along with the opening of the waterslides for the children in the area adjacent to the civic center and park.
Refreshments, prepared by the Fort Crawford Commission members, will be available inside the civic center until 4 p.m. and will then be served at the main pavilion in the park until the end of the festivities.
Entertainment by local performers will begin at 5 p.m. and will be followed by High Horse at 8 p.m. as the headline musical guest for the evening.
Fireworks will begin at 9:30 p.m. and can be viewed from the park or surrounding areas in the community.