Barbecue is ‘in our blood’ 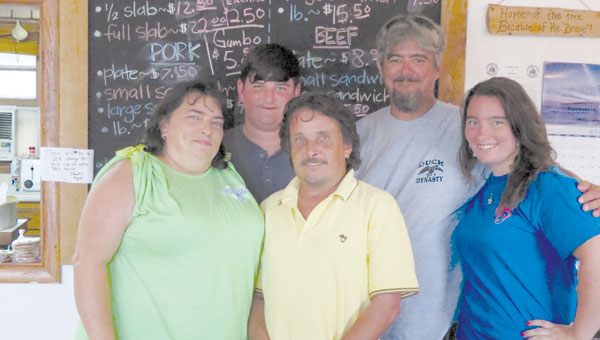 Martha and Ludon Simmons, along with other family members, have joined forces in owning and operating George’s Barbecue.

To some people it’s just meat and sauce, but to the Simmons family barbecued food “is in our blood.”
Ludon and Martha Simmons recently took ownership of George’s Barbecue on Douglas Avenue in Brewton — a move Martha says is an answer to prayer.
“I was just looking for a job one day and came into George’s to talk to Shannon (Brantley),” Martha said. “He told me he had just been saying how much he needed some help from someone who knew barbecue not five minutes before I walked in. I guess it was meant to be.”
From the time Martha began working at the restaurant she now owns, the desire to have a place of her own continued to grow.
“I love working with the public and I love people,” Martha said. “All my life I have lived cooking out. We grew up camping and still go camping and cooking out is just our thing. It’s in my blood and we just love it.”
Ludon said he’s happy to know his family will benefit from something he believes his wife was meant to do.
“She has spent 15 years in the barbecue business,” Ludon said. “She knows barbecue and she’s good at it. This is just where she was meant to be.”
The couple — along with their children Mariah and Marcus — will be working in the family business to offer quality barbecue to the customers at the restaurant.
“We will be keeping everything on the menu the same for now,” Ludon said. “We may add a few things to the menu soon, but we want to make sure that the people who come to George’s are able to get the items they are used to getting.”
Martha said there are plans to possibly add a few more side dishes to the menu as well as some new barbecue sauce choices for the variety of meats they offer.
“We’re working on a couple of new sauces right now,” Martha said. “We’ve still got a little tweaking to do, but we’re getting there. The traditional George’s Barbecue Sauce will still be the house sauce, but we’re working on two new sauces that will be our family made sauce.”
With a location right in the heart of the business district of Brewton, customers at George’s may see a few minor changes in the atmosphere when they come in to dine.
“We’ve changed things around a little in the dining room area,” Ludon said. “We’ve spiffed things up a little and some of the décor has changed. We’ve brightened things up a little and it’s a great, comfortable place to come in and enjoy a meal.”
Martha said the first two weeks as owner of the business has been a blessing for the family.
“The customers have just been great,” Martha said. “They come in expecting great food and that’s what we give them and it’s just been great. We have an employee off who needed some time off and Mariah has stepped in to help out. She’s a people person, too, so it’s working good for the family.”
The George’s Barbecue menu will continue to offer items the public has always enjoyed including ribs, chicken, pulled and chopped pork, beef, sausage dogs, loaded potatoes, baked beans potato salad, coleslaw, peach and blackberry cobbler and chocolate chip cookies.
“We also have breakfast and some of our most popular dishes are the tomato gravy and sausage gravy,” Martha said. “We make homemade cathead biscuits and a full breakfast menu including fried bologna. If there’s something you want and it isn’t on the menu, just ask for it and we’ll do our best to serve it up. We do our best to make our customers happy and feel like they are at home when they come in.”
George’s Barbecue will continue to operate Tuesday through Saturday with breakfast from 5:30 to 10 a.m. and barbecue from 10 a.m. to 6:30 p.m. or until it’s gone.