Festive Fourth: Fireworks early, but rest of day a success 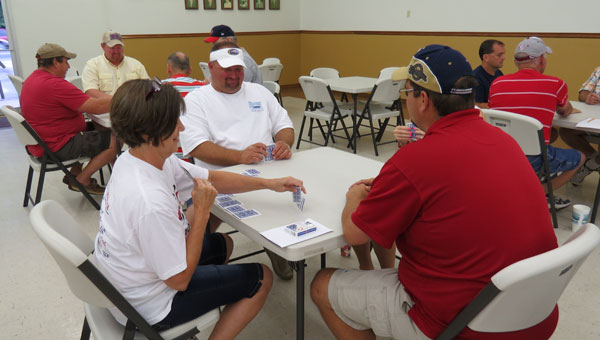 Joey Wyatt, center, and Marlin Franklin, shown facing away, were the ultimate winners in the annual July 4th Spades tournament in East Brewton.

A miscommunication between event organizers and a pyrotechnic crew sped up the launching of fireworks culminating a day long July 4th celebration in East Brewton.
Organizers said a miscue was probably the cause of beginning the fireworks a half-hour ahead of schedule.
Although the miscue may have left some people without a fireworks finale to the day, organizers for the event say revelers seemed to enjoy the rest of the day.
East Brewton Mayor Terry Clark said activities and tournaments for the day went off as planned with thousands of people enjoying the activities.
“We had a wonderful day for the festivities,” Clark said. “There was a prediction that said we would be getting a lot of rain. But, with a lot of prayer and planning, the day turned out beautifully and temperatures were perfect for enjoying a day in the park.”
One of the main attractions for the annual July 4th celebration at Fort Crawford Park is the duck race handing out cash prizes to the first three ducks caught at the finish line.
Winners in the duck race were Mattie Padgett in first place, Patti Whitworth in second place and Tyler Chapman in third place.
Bingo players filled the East Brewton Civic Center to near capacity with a new caller taking the microphone for the games.
Debi Johns, assisted by David Johns, called numbers and awarded bingo prizes for more than two hours.
“Debi did a great job for us,” Clark said. “She worked hard gathering the prizes for the bingo games and she did a great job calling the games.”
Clark, who has been the bingo caller for many years, called the finale game to give away the grand prize of the day.
A spade tournament was filled to capacity with the team of Joey Wyatt and Marlin Franklin taking home the coveted tournament.
Steven Dunaway, a member of the Fort Crawford Commission who planned and organized the annual event, said the day was a success based on reactions from those attending.
“Everyone really seemed to have a good time,” Dunaway said. “The weather turned out really nice with no rain and some cooler temperatures. It really was a good day.”