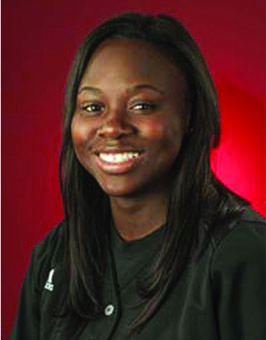 Cool, challenging and many memories: That is how former T.R. Miller Lady Tiger
Leah Brundidge described her first year at college at Troy University and as a member of the Lady Trojan softball team.
“My first year was pretty cool,” Brundidge said. “I learned the importance of having time management skills while trying to balance school work and softball practices throughout the day along with a trying to have a little social life as well. I feel like I learned a lot on and off of the field and I met a lot of new people which was pretty cool also.”
Brundidge and the Lady Trojan softball team went 21-32 overall this year. Troy was 8-9 at home, 7-16 on the road, 6-7 in neutral field games and was 7-14 in Sun Belt Conference games.
“This softball season was a challenge not only for me but for the team overall,” Brundidge said. “It was a challenge for me because I had to transform from being one of the main players (in high school) to becoming a role player and doing whatever my team needed me to do. We were kind of young this year and a few injuries hurt us some throughout the season, and we ended up finishing with a losing season.
“I feel like going through this season will only make us stronger next year.”
Although she did not start any of the games this year at Troy, Brundidge played in 33 games this year as a freshman.
“I made an appearance in quite a few games as a pinch runner which is kind of what I was expecting coming in as a freshman,” Brundidge said. “I did get a few chances against a few big named schools such as Florida State, Virginia Tech and Louisiana-Lafayette.
“I feel like if I keep working and keeping improving the little things, I’ll be able to contribute more next year, though.”
At T.R. Miller, Brundidge played just about every female sport the school offered. Brundidge played volleyball, basketball, track and softball.
While her high school career saw her play in many sports and games and come away with some championships on the basketball court and the track, Brundidge only played softball in college.
While just playing one sport at the collegiate level, she said it is a lot different than at the high school level.
“The difference is just the speed of the game really and the importance of the little things,” Brundidge said. “Time management comes into play way more in college than in high school.
“With having like three classes a day and then maybe having two practice periods plus finding time to workout during the day can sometimes be difficult, but it’s not as bad as it sounds if you manage your time well.”
While the season may have been a losing season on the field for Brundidge and Troy, she said she has many memories to choose from her first year playing college softball.
“One memory on the field was getting my first stolen base against Auburn,” Brundidge said. “Another one, although off the field, was probably getting to fly for the first time when we went to Texas or just goofing off at the random places we went with my teammates.”
According to stats on www.troytrojans.com, Brundidge had four at bats with no hits and four strikeouts.
Brundidge scored eight runs and was 2-for-5 in stolen bases this season.
Brundidge is a sports and fitness management major. Brundidge is the daughter of Eddie and Sybil Brundidge.