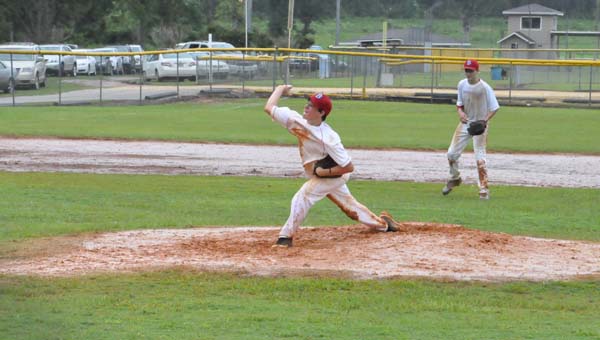 In the 1970s, the band The Fortunes tuned a hit song “Here comes that rainy day feeling again” and little did they know that song would define the 2013 Babe Ruth 13-year-old district 7 all-star tournament in Evergreen this past weekend and this week.
In a tournament plagued by rain and two days worth of game cancellations, the Brewton all-stars are one win away from a district title.
After seeing opening round games on Friday postponed, Brewton opened their tournament Saturday against Monroe and suffered an 18-7 loss to open tourney play with an 0-1 record. Later in the day, Brewton returned to Evergreen and rebounded with an 18-0 win over the host team Evergreen in three innings to improve to 1-1.
Tourney games were postponed Sunday due to weather conditions in the area, but resumed Monday where Brewton picked up a pair of 10-run mercy rule wins.
Brewton kicked off games Monday with a 13-3 win over Atmore in five innings to set up a rematch against Monroe later in the day. Needing to win twice over Monroe, Brewton picked up a 14-4 win in five innings to force a deciding game Tuesday night back in Evergreen between the two teams.
As of Monday’s wins, Brewton was 3-1 in tournament play while Monroe was 2-1. Evergreen was the first team eliminated Saturday with an 0-2 record. Atmore was eliminated after their loss to Brewton with a 1-2 record.
Brewton and Monroe were scheduled to play at 6 p.m. Tuesday. See Saturday’s paper for a full recap of the championship game.

Saturday: Monroe 18, Brewton 7
In dripping wet and muddy uniforms that were white when the game started, the Brewton Babe Ruth 13-year-old all-stars started their district tournament Saturday in Evergreen with an 18-7 loss to Monroe. The game lasted three hours and saw a steady rain the entire game with sloppy field conditions.
Monroe struck for six runs in the first inning and led Brewton 9-1 after two innings as they cruised to the 11-run win. Brewton cut the lead to 10-5 in the third inning but would but would be outscored 8-2 the remainder of the game as Monroe used a four-run seventh inning to help them to the big win.
Stokes Jennings, Russell Smith, Drew Williamson and Matt Hutchins all pitched in the loss with Jennings being the pitcher of record.
The quartet of pitchers went seven innings and allowed 16 hits, 18 runs, walked seven, struck out five and hit three batters.
At the plate for Brewton, Hutchins had an RBI and Jennings had a single. Connor Huskey had a single and two RBIs while Smith had a single. Jason Konsler had two singles and two RBIs and Hayden Atkinson had a double. Hunter Revel had one RBI in the loss.

Saturday: Brewton 18, Evergreen 0 (3 innings)
Needing a win against Evergreen to stay alive later Saturday, Brewton did just that as they rolled to an 18-0 win over Evergreen in three innings.
Huskey and Moye helped Brewton get the win on the mound as they pitched two innings of scoreless ball (Evergreen’s coach called the game in the top of the third inning). The duo went two innings and allowed no hits, no runs, walked one, struck out six and hit one batter.
For Brewton at the plate, Drew Williamson had a double, a triple and a single while Hutchins had one RBI.
Jennings had a single and a walk-off inside-the-park homerun and five RBIs. Huskey had one RBI and Smith had a single. Moye added a double and two RBIs while Atkinson had a single and one RBI. Revel and Kristian Taylor had one RBI each.

Monday: Brewton 13, Atmore 3 (5 innings)
The Brewton Babe Ruth 13-year-old all-stars stayed alive in their district tournament Monday as they cruised to a 13-3 win over Atmore. The loss advanced Brewton in the tournament while Atmore was eliminated.
Leading Atmore 1-0 after the first inning, both teams were held scoreless in the second inning, until Brewton blew the game open in the third inning.
Leading by one in the bottom of the third, Brewton plated nine runs on seven hits to turn a 1-0 lead into a 10-0 lead. All nine runs for Brewton came with two outs in the inning.
After came to life in the fourth inning when they plated three runs to cut the lead to 10-3. From there, Brewton scored three runs of their own in the bottom of the fifth to end the game with a 10-run mercy rule win.
Brewton pounded out 10 hits in the win while Atmore was held to only two. Brewton benefited from seven Atmore errors including five in the third inning.
Matt Hutchins earned the win on the mound for Brewton as he went two innings and allowed no runs, no hits, no walks and struck out none.
Weston Riddle went the final three innings and allowed two hits, three runs, walked two and struck out three.
For Atmore, JaBryce Hooks, Lil Dee Poole and Jackson Moore all pitched with Hooks being the pitcher of record. The trio of pitchers went 4 2/3 innings and allowed 10 hits, 13 runs, walked four, struck out three and hit one.
Fred Flavors and Moore had the lone hits for Atmore with Moore having one RBI.
For Brewton, Drew Williamson had two singles and two RBIs and Stokes Jennings had a single and one RBI. Brandon Moye had the hot bat for Brewton has he had a triple and a double and three RBIs. Russell Smith also had a good night at the plate for Brewton as he added a double and a single and three RBIs.
Kristian Taylor had a single and Jason Konsler had a double. Riddle added a single and one RBI.
The games were scheduled to be played Sunday in Evergreen, but rain in the area postponed games until Monday.
Atmore finished 1-2 in tournament play. Atmore began the tournament Saturday with an 11-7 win over Evergreen, but suffered a 20-0 loss in two innings later in the day to Monroe.

Monday: Brewton 14, Monroe 4 (5 innings)
Brewton head coach David Jennings guaranteed a win for his team and he was right as his team got revenge on Monroe after Saturday’s opening loss with a 14-4 win in five innings Monday.
Huskey helped Brewton to the win as he earned the win on the mound. Huskey went the complete game five innings and allowed six hits, four runs, walked three and struck out six.
At the plate for Brewton, Williamson had a double and one RBI while Hutchins had a single and two RBIs. Jennings added an RBI while Smith had a single, a double and three RBIs.
Brewton and Monroe tied 1-1 after the first inning only to see Brewton take a 2-1 lead in the second. From there, Monroe rallied to take a 4-2 lead in the third, but Brewton regained the lead in the bottom of the inning and never looked back as they scored three in the third, five in the fourth and nine in the fifth to get the 10-run mercy rule win.
In the nine-run fifth inning, Brewton benefited from seven walks and one hit batter.