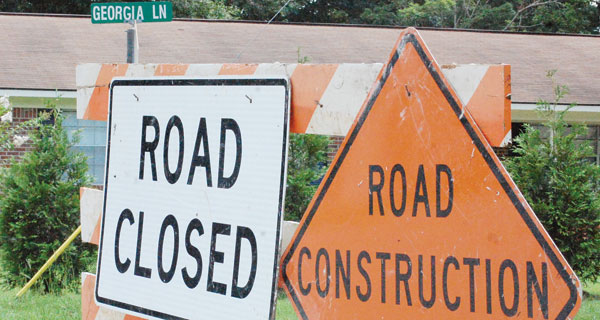 Residents along Georgia Lane may be inconvenienced a little in the coming weeks as workers prepare the road for paving — a bit of news many are happy to hear.
For several years, residents of Georgia Lane as well as motorists who regularly use the road, have complained of pot holes and patches that created a bumpy ride.
Escambia County Engineer Bill Bridges said work crews are in the process of helping make that ride a little smoother.
“We will be working cleaning the ditches and checking pipes along Georgia Lane and there may be some sporadic closings,” Bridges said. “There will be times when traffic will have to detour, but it’s not a bad detour. The work is being done in preparation for paving.”
Bridges said since the road has very little right-of-way or shoulder, closings for brief periods may be necessary as work continues.
“When you put some big equipment like we have to use on the road, there is just no way to get around it,” Bridges said. “There may be some times when we have to close the road for 30 minutes to an hour during this part of the process. It won’t be bad and it’s just necessary to get to the point to be ready to pave.”
Although no specific time has been set for the paving to begin, Bridges did say that it would happen “sometime this month.”
“We hope to be finished with the prep work sometime this week,” Bridges said. “We expect to have our work done and be ready for paving sometime in the next couple of weeks. The very latest we could expect to see paving would be the first week of August but we don’t expect that much of a delay.”
Work began as quickly at Monday afternoon with workers preparing the roadway for paving.
The entire length of Georgia Lane is included in the project that spans from where the road intersects with Old Castleberry Road and Appleton Road, Bridges said.
“That’s probably less than a mile to pave,” Bridges said. “I think the pavers could probably get that paving done in a day. It just depends on the weather and how the machines run. It should be a quick project when the paving begins.”
Drivers who regularly travel on Georgia Lane should expect sporadic brief closings over the next one to two weeks with detours clearly marked along the route, Bridges said.
Fans of The Brewton Standard’s Facebook page were pleased by the announcement, with some saying “it’s about time” the road was paved.