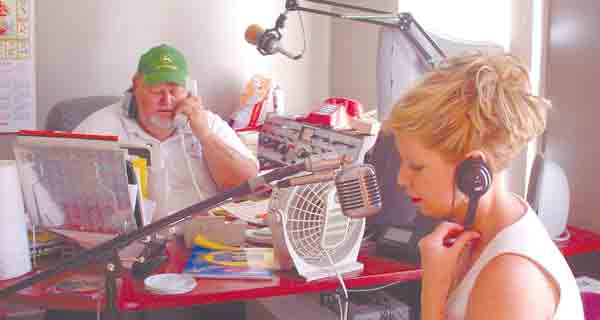 file photo | The Brewton Standard
Dunaway is shown above left with co-host Candy Cashman Smith during broadcasts on WEBJ-AM following Hurricane Ivan in 2004 as the pair gave valuable information to area residents.

For decades, radio listeners throughout the Brewton area tuned in for news and commentary at WEBJ radio — and Dennis Dunaway was right there to give them what they wanted.
Dunaway died Thursday afternoon in a Pensacola, Fla., health care facility after a lengthy illness. The former councilman and radio personality was 62 years old.
Chandler Dunaway said her father battled an illness that hospitalized him May 7 — a battle that he lost this week.
“Dad went into the hospital on May 7,” Chandler said. “He got better for a while and he was up talking and interacting with everyone. But, he took a downturn kind of quickly and had been really sick for about five days. He just wasn’t able to get his strength back before this hit him.”
Dunaway served on the Brewton City Council for Place 1 for 12 years — serving an eight-year stint and returning for another four years. The councilman lost his bid for the seat last year.
Former Mayor Ted Jennings was the city’s leader during all of Dunaway’s 12 years on the council. “Dennis was a tireless public servant,” Jennings said. “He constantly worked for the betterment of all the people in this community. We shall miss him.”
Current Councilman Joe Watson said serving with Dennis taught him much about the inner workings of government.
“Dennis was right there to provide me with some good insights on city government,” Watson said. “I asked him for advice on many occasions, and he was always willing to offer some help.”
Although Watson served as councilman with Dunaway, he also worked with the radio station owner away from city hall.
“I started working as a D.J. at the radio station on Sunday mornings,” Watson said. “He gave me a shot at it and I’ve worked doing some ballgame broadcasts and that sort of thing. He was always doing everything for the city from serving on the council to broadcasting news and information that was important to the people of the community he cared so much about. He is certainly going to be
Spinks Megginson practically grew up with Dunaway, giving him his first taste of radio life as a child.
“I grew up listening to Dennis and Candy Cashman going to school every day and I really got interested in radio because of that,” Megginson said. “In 2006, when I was just a 15-year-old, squeaky-voiced teenager, he asked me if I’d like to work for him at the station to get my feet wet and see if I liked it. He started out letting me do the daily tropical updates for a few years and that was my first opportunity to get into broadcasting.”
Since that start nearly seven years ago, Megginson said he has had more opportunities to be a bigger part of broadcasting at WEBJ.
“Over time I have become more involved in the radio operations and have had quite an opportunity to fill in here and there for Dennis,” Megginson said.  “I appreciate the fact that when I had an idea for the community he was always supportive if it benefited the community. He was very passionate about good things for Brewton and East Brewton. The biggest thing that stood out to me was the fact that he always told me that regardless of the time you have to wake up and the sacrifices you make to do this, do it with a servant’s heart to make sure you come at it with a good perspective. He always wanted to instill that in everything we did.”
Barbara Maddox was more than a co-worker with Dunaway for many years; she is also a member of his extended family.
“He was such a special person,” Maddox said. “I just loved working with him in radio because we had such a good time together. But, now I won’t have anyone to argue with — or should I say debate. We could really do some debating. We had a good time with that. He was very special in so many ways. He was such a good man and I know he’s at peace with the Lord now. My heart is real empty today.”
Dunaway was a 1969 graduate of W.S. Neal High School in East Brewton. He attended Jefferson Davis Junior College from 1969-1971 and was a 1973 graduate of Auburn University and a 1978 graduate of University of Alabama at Birmingham.
He is survived by his wife, Janet Monk Dunaway, and a daughter, Chandler Dunaway, both of Brewton.
For a complete obituary for Dunaway, see page 3.