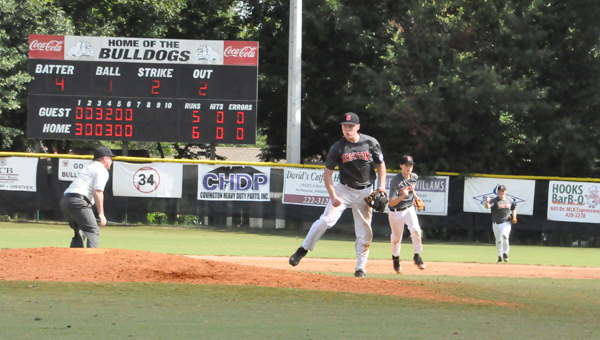 Brewton players get excited as they record the final out of the game Monday against Childersburg.

Motivation for a sports team can come in many different ways. In the case of the Brewton Babe Ruth 15-year-old all-star team Monday afternoon at the state tournament against Childersburg it was a deflating call by an umpire and a player and coach’s ejection in the fourth inning that motivated them to a 6-5 rally win in the single elimination part of the tournament. The win for Brewton put in the state semifinals and two wins away from a state championship.
Leading 3-0 after the first inning Monday against Childersburg, it looked as if the Brewton all-stars would be on their way to an easy win. Leading 3-0 in the top of the third, things changed in a hurry for the Brewton all-stars as they committed two errors in the inning and allowed three hits as Childersburg tied the game at 3-all. Brewton ended up using three pitchers in the inning.
In the fourth inning, things continued to go downhill for the Brewton team as Childersburg plated two more runs to take a 5-3 lead.
Down by two in the bottom of the fourth inning and one out in the inning, Brewton’s Derrick Barton hit the ball back to Childersburg’s pitcher who threw Barton out at first. With Barton running down the baseline, Childersburg’s first baseman caught the ball in the baseline and the two collided. The collision resulted in Barton being thrown out of the game and also resulted in Brewton first base coach Lew Najor being ejected as well for questioning the call. This comes one inning after Brewton’s Lane Chavers was ejected for a similar play at home plate.
Following the ejections of Barton and Najor, with two outs in the inning, the Brewton all-stars came to life.
From there, Malcolm Hawthorne, Tim McDonald, Tripp Floyd and Austin Holmes all singled and Jake Najor followed with a walk while Colton Morris was hit-by-pitch.
When the final out was recorded in the inning, Brewton rallied with three runs in the inning to take a 6-5 lead.
Neither team would score in the fifth and sixth innings as Brewton took their one-run lead in the top of the seventh. Three outs away from a win and a berth in the state semifinals, Childersburg had runners on first and third in the inning, but Brewton was able to hang on for the win.
In the game Monday, McDonald earned the win on the mound as he was the fifth and final pitcher of the game for Brewton. McDonald went the final four innings of the game and allowed six hits, two runs, walked none and struck out four.
Floyd got the start on the mound and went two innings and struck out three. In the third inning, Holmes went 2/3 of an inning while Chavers went 1/3 of an inning. Morris also pitched in the inning. Holmes allowed one hit, three runs, walked and hit a batter. Morris faced one batter earned a walk. Chavers faced one batter and earned a strikeout.
At the plate for Brewton, Hawthorne had a single while McDonald had two singles and three RBIs. Floyd had two singles while Chavers, Holmes and Najor all had singles as well. Holmes had one RBI in the win.
Brewton will be back in action Wednesday in Andalusia as they will play at 10 a.m. at LBW in the Final Four of the tournament. A win and Brewton will play for the state championship later in the day at 5 p.m. The opponent for Brewton’s 10 a.m. Wednesday game was unknown as of press time.