Stand by me: Friends plan benefit 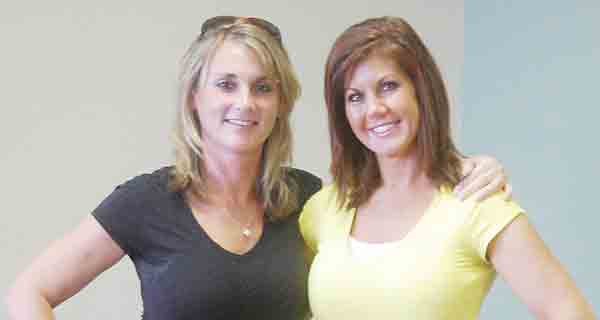 Carter, left, is happy for friendship of Lodge, right, who is working to organize a fun benefit.

Tressa Carter felt the edge of her tire leave the road as she was driving down Appleton Road on her way to work May 30.
She pulled the wheel back to the road, but somehow lost control of the truck. In seconds, it was flipping, and she went through the windshield.
Lying on the road, Carter felt searing pain in her legs. She chanced a look back and saw a gruesome injury, but she doesn’t remember how the leg was cut open.
What she does remember is that people arrived immediately: a woman she barely knew who was driving behind her and called her loved ones; the strangers who gathered her belongings; the best friend who came to the scene.
And later, her husband — who she calls her “hero” — who has been by her side through her recovery.
After five days in the hospital in Pensacola, Carter’s doctor gave her the news she had been preparing herself for: They had to take her leg.
“Even laying on the highway, I knew if they could save it, it would take a lot of plastic surgery,” she said. “It think that’s why I have accepted it.”
And Carter has not let anything slow her down. She is getting around with a walker now, and even driving — but she hopes to have a prosthetic leg soon, which the avid runner plans to put it to good use.
“I told them I want a running foot,” she said. “And I am going to prove to the prosthetic doctor that (running) will happen before the end of the year.”
Carter credits her circle of friends and family with keeping her spirits up during her recovery, especially husband Dewitt.
“My husband has been such a big help,” she said. “He would push the therapist away and say, ‘No, let her do it.’ If not for him, I would not have progressed so far.
“I thank God for him. He’s been my hero.”
Carter’s friends have also been supportive. Ashley Lodge, with whom she works at Alabama One Weight Loss, is a close friend and running partner.
“She visited me every day when I was in the hospital,” she said. And later, “she’d call me morning and afternoon to check on me.”
Carter’s sister has also been a huge help, driving her to appointments and staying the night if necessary to help out at home.
Carter’s friends have even been raising funds to help her recovery, and Tonya Davis has planned a unique fundraiser Saturday with some local “celebrities” offering to take a pie in the face for the cause if they raise the most money.
For Carter, that kind of support has been an important part of her recovery.
Carter admits she has had a breakdown or two since the accident, but she is grateful that things happened as they did. If the wreck had been just a week earlier, her 16-year-old daughter would have likely been in the car with her.
“There’s no need to be sad,” Carter said. “I have my life, and I have my family.”