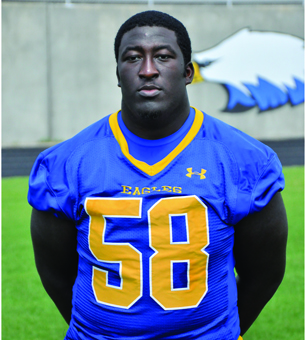 Recent W.S. Neal graduate Tavin Ingraham will join two former Eagle football teammates at Stillman College this fall as he has accepted a position on the team as a walk-on.
“It feels amazing,” Ingraham said of the opportunity. “It’s something that every high school player dreams about doing one day.”
Ingraham will join other W.S. Neal former Eagle players Josiah Nettles and Bryson Peterson at Stillman College this coming fall. Ingraham, Nettles and Peterson will join Teddy Keaton at Stillman next season. Keaton is from East Brewton and went to W.S. Neal High School.
“I’ve always heard a lot of good things about the program and just feeling a lot of support from Coach Keaton,” Ingraham said. “It’s a great feeling to play with Josiah and Bryson. It is something us three have discussed doing for months now and when the opportunity came I took it. I have been invited as a walk-on, and if everything plays out right it will lead to a scholarship soon.”
Ingraham said his education would come first at Stillman.
“I plan on graduating from the nursing program while attending college,” he said. “I plan on doing whatever it takes to make me be successful on and off the field. It’s been a dream ever since I started playing back in little league. I’ve always believed that it would happen and I put a lot of faith behind it. I just want to thank my mom, dad and my coaching staff at Neal for pushing me all the way through this process.”
W.S. Neal head coach Doug Hoehn said Ingraham has been working very hard.
“He had five or six offerings from different schools but just kept coming up short on his ACT,” Hoehn said. “He kept plugging away and qualified late. It just shows again that hard work pays off.”
Hoehn said Ingraham is one of 11 recent W.S. Neal seniors heading to college.
“For a 3A school or size, I am really proud of these kids,” Hoehn said. “We have 11 kids who are going to college to play sports. We have two going for softball, three for baseball and six for football. I am really proud of all of them. For our total enrollment per grade, to have 11 of our recent seniors go to college to play sports, that is very good.”