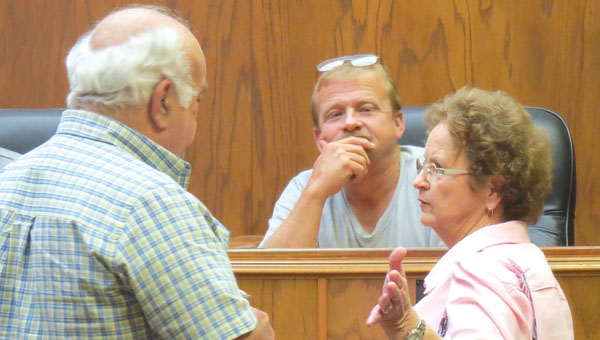 A ride down Mayo Street in East Brewton would give a clear picture of why more than a dozen residents of the street were voice serious concerns to members of the East Brewton City Council Monday evening.

Litter, rubbish and general ruin in the neighborhood was the focus of many comments made to the council by residents.

“We have some problems there and we need some help,” Mayo Street resident Henry Hooks said. “Mayo is the best street going right up to W.S. Neal High School. We need help cleaning it up.”

Mayor Terry Clark said he had recently been made aware of the situation residents in the area were facing until one resident pointed out the problems.

“I know what you’re talking about now,” Clark told the residents. “I went down the street twice to look at the issues you all are facing there. I can assure you that we are working on the problem as quickly as we can. A citation has already been written and that person will have to address the situation in court. We want to get this situation taken care of for you and the rest of East Brewton, but I ask that you be patient. We have to go by what the law will allow us to do in these situations and it just takes time.”

Other residents spoke out in opposition to the situation and explained how the problem is causing more than an appearance issue in the neighborhood.

“Our property is getting de-valued because of all of this,” Alice Rider said. “We’ve put so much money into our homes and this kind of situation means we’d never get our money back so we’re stuck.”

Rider also said the plans for a new W.S. Neal High School should only speed up a clean-up of the area so the city can be seen at its best.

“The county is putting all that money into a new school, but when people have to drive down this street to get there, what is that saying about our city?” Rider said. “I’m embarrassed to have people come visit me. I actually tell them a different way to come to my house.”

Jan Lanier said the issues that are obvious along Mayo Street are not new problems.

“There are three houses in a row right there that look like they are falling in,” Lanier said. “My street that I have lived on for 40 years used to be so charming. I’d love to see that again, I’d get out and help clean up if that’s what it takes.”

Rider said the problems could have been addressed earlier if council members would take a ride through the city streets more often.

“How many times have council members and city workers traveled down that street?” Rider asked. “It should have been noticed and reported before now. I think the city has drug its feet on getting this problem cleaned up.”

Clark admitted the city had not taken the needed steps to eliminate the issues and prevent more problems from cropping up.

“I do apologize,” Clark said. “We have drug our feet. I promise you that something is fixing to happen on Mayo Street. It’s our fault and we will move as quickly as possible to clean things up.”