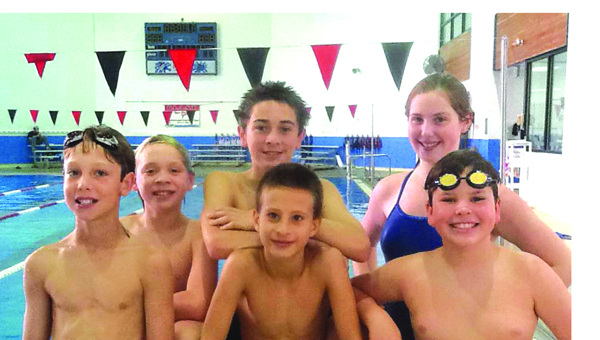 The Brewton Local Area Swim Team Tigersharks continued their busy summer schedule over the weekend as they made a big splash in Nashville at the Southeastern Long Course Championships.
Local swimmers from the BLAST Tigersharks attending the meet were: Nolan Atkinson, son of Rob and Lisa Atkinson; Mac Baxter, son of Chris and Angel Baxter; Elizabeth Glass, daughter of Dewayne and Brooke Glass; Cole Jernigan, son of Lee and Felicia Jernigan; Colby Morris, son of Brandee Chase Morris; and Walker Volonte, son of Roberto Volonte and Cristina Fusi Volonte.
“Each of our Tigersharks had an outstanding meet in Nashville,” swim team head coach Angel Boyd said. “One that they should certainly as proud of as I am to be their coach.”
Atkinson, a recently turned 10-year-old, took eighth place at the event.
“Nolan medaled and racked up team points for our Tigersharks this weekend in the 50-meter freestyle,” Boyd said. “Nolan also turned in a AAAA freestyle time in the 100-meter freestyle, placing 11th overall in that event. Nolan also swam personal best times in both the 200-meter freestyle and the 50-meter butterfly events where he narrowly out-touched our other 10U all-star, Mac Baxter by a 10/100 of a second.”
As for Baxter, Boyd said he was at the top of the 10U age group and also had an outstanding performance at Southeasterns.
“Mac dropped10 seconds and swam his way to a personal best time in the 400-meter freestyle, improving in the 100-meter breast stroke, 200-freestyle, and swimming a top-20 breaststroke race, and an Iron Man 200-individual medley, where he also dropped time. Mac is my middle distance swimmer with a big heart and an amazing stroke technique.”
Boyd also said that Elizabeth Glass had a “banner meet” in Nashville, swimming her speciality freestyle events and dropping time in both.
“Elizabeth has worked hard to earn her spot as a Elite Tigershark swimmer,” Boyd said.
Cole Jernigan is a young 11-year-old swimmer for the Tigersharks. Boyd said the events he swam in at Nashville were very competitive.
“Cole swam in the 11-12 age group and represented our Tigersharks with great form and earned some personal best times in the 50 and 100-meter backstroke events, where he earned his place as the teams top backstroker as well as the 200-free and 50-freestyle events,” Boyd said. “Cole is an amazing little swimmer, who will continue to represent the Tigersharks in a big way.”
Another swimmer that had a good meet in Nashville for Boyd and the Tigersharks was Colby Morris.
“Colby had some outstanding swims in the Long Course Championships this past weekend earning personal best times and earning his spot as the teams top freestyler,” Boyd said. “Colby dropped over three seconds in the 100-meter backstroke and a second or more in each of the other strokes he swam in Nashville. Colby is a great little swimmer, who worked hard to get to this elite level.”
Eight-year-old Walker Volonte also represented Brewton well in Tennessee.
“Walker represented the Tigersharks in the 100 and 50-meter 10U breaststroke events,” Boyd said. “Walker, who was nervous the first day, came back on Sunday, to race the 100-meter breaststroke in perfect form.
“Walker, who will leave us in August, to live in Italy, swam his heart out in his last meet as a Tigershark.”
The Tigersharks will travel on Friday of this week to “rock the blocks” in Fairhope.
“We will swim for trophies and medals in the Gulf Coast Area Aquatic League (GCAAL) Summer Championships this Friday and Saturday,” Boyd said. “Check out our Tigersharks via Facebook (Brewton Local Area Swim Team) page.”
The Brewton Tigersharks are led by head coach Boyd and assistant coaches Brandee Morris and Brooke Glass.