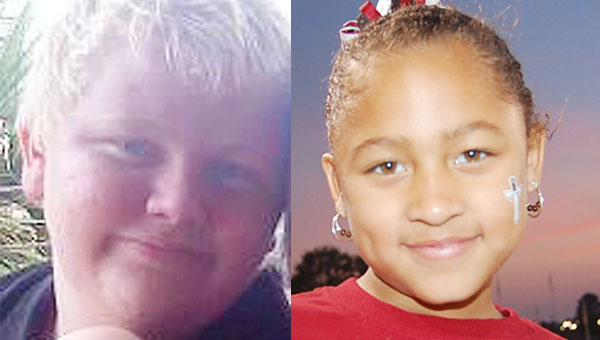 Angela Robinson spent one hour with her son the evening before his funeral.
When he was laid to rest Friday afternoon, she remained in a jail cell, charged with reckless murder after his death Monday night in a single-vehicle crash on Travis Road that investigators say was caused by intoxication and speeding. Nicholas Robinson, 13, was riding, unrestrained, in the bed of the truck with his cousin, 11-year-old Anasia Brazile.
The pick-up truck veered off the road, slammed into a power pole and rolled over — throwing Nicholas and Anasia out of the truck bed.
Nicholas was killed. Anasia remains hospitalized in Pensacola.
Driver Earl Dickerson was also charged with murder on Tuesday morning; Angela Robinson, Dickerson’s girlfriend, was arrested Wednesday afternoon. Each is being held on $150,000 bond.
Escambia County District Attorney Steve Billy said authorities chose to levy the murder charge against Robinson after Alabama State Troopers presented the findings of its investigation into the crash.
“She basically put her children in that situation,” Billy said. “She knew the guy was drinking and driving at a high rate of speed. She made that choice to put the children, unrestrained, in the back of that truck.”
Earl Dickerson was the only person wearing a seatbelt during the crash, according to reports.
While it is not specifically illegal to ride in the bed of a pickup truck, it is illegal for children under the age of 16 to be unrestrained in a motor vehicle.
Angela Robinson may be facing life in prison as a result of the crash.
“Typically, the sentence for a reckless murder conviction is 10 years to life since it is a Class A felony charge,” Billy said. “But in her case, she’s looking at a mandatory life sentence since she already has two felony convictions on her record.”
Billy said Robinson was previously convicted of a purgery charge and a possession of a controlled substance charge.
A warrant for Dickerson’s arrest reportedly states that he allegedly operated and wrecked the truck while speeding, while Nicholas was an unrestrained passenger and while Dickerson was allgedly under the influence of alcohol and/or drugs.
The warrant for Angela Robinson’s arrest reportedly states that she allgedly allowed her son to ride unrestrained in the bed of the speeding truck, and that she was also allgedly under the influence of alcohol and/or drugs.
“The information in this case will be presented to the grand jury to see what other charges may be considered,” Billy said. “She had a total disregard for the safety of those children. This is what we had to do.”
Two other children — Angela Robinson’s daughter Sierra and Terri Thomas’ son — were riding in the cab of the truck with Dickerson and Angela Robinson, Thomas said Thursday. They received minor injuries, as did Dickerson and Robinson.
Both Dickerson and Robinson remained behind bars at the Escambia County Detention Center as of press time Friday.
Escambia County Sheriff’s officials said on Thursday, Robinson was allowed to spend an hour — which is customary — with her son at Williams Memorial Chapel Funeral Home prior to Friday’s funeral services for the teen.