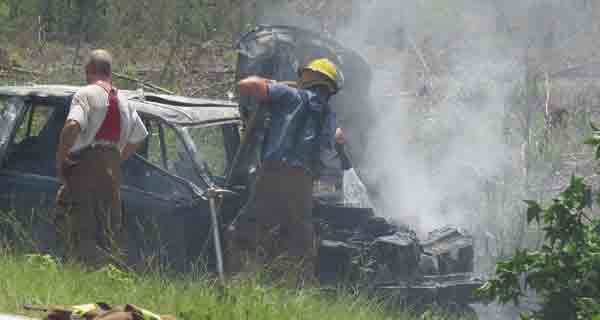 Firefighters with the Dixonville Volunteer Fire Department work to extinguish the blaze that engulfed the van Jessica Day was driving Monday.

A young woman can count herself lucky after the vehicle she was driving crashed and caught fire Monday afternoon on Travis Road.

Jessica L. Day, 16, was driving a mini-van vehicle along Travis Road just after noon Monday when the vehicle left the road and crashed into rubbish and into a small group of standing trees.

Members of the Dixonville Volunteer Fire Department quickly put the burning vehicle out and continued to work the scene for nearly two hours. Traffic was stalled along the stretch of Travis Road leading north and south from the crash scene for nearly three hours.

Witnesses at the scene say Day received minor injuries in the incident and refused transport by ambulance.  She was taken by private vehicle to be treated for her injuries.

Alabama State Troopers were investigating the crash into the afternoon.