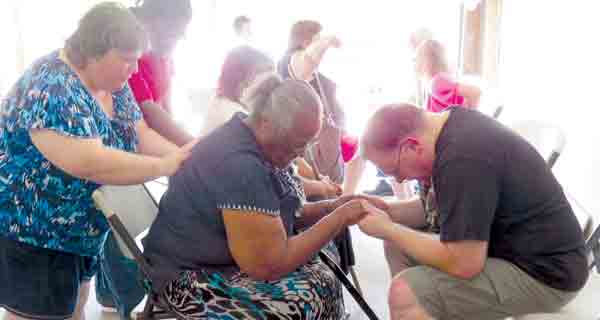 Ann Wheeler, standing at left, and Vaughn Wheeler, seated at right, pray with a recipient at Thursday’s food give away organized by New Beginnings Worship Center and volunteers.

A Thursday distribution of 10,000 pounds of food was a tool that allowed a local Christian group the chance to witness and pray with those in need in the community. Bo Bell, pastor at New Beginnings Worship Center, said the distribution from the church’s food bank is only part of the focus for such events. “We want to meet the needs of this community,” Bell said. “With this distribution we made contact with 230 families. That touched a total of 646 individuals in this community.” Bell said the prayer team, comprised of representatives from several churches, prayed with individuals and had a praise report at the end of the day. “Around 20 commitments of faith were made in the prayer circle,” Bell said. “The prayer team even reported that two people were healed — one with stomach issues and another with a knee injury who got up and walked away pain-free.” Bell said as many as six churches – possibly more — were represented in Thursday’s distribution event. “It’s great to see the different churches and different denominations getting together to serve the community,” Bell said. “We had about 55 volunteers who stepped up to help out with this give-away.” Bell said in addition to the volunteers, clients at the New Beginnings residence were also involved in assisting those who received food boxes. “I want the community to see the clients and know they are being restored,” Bell said. “They worked hard and were glad to serve the community.” Bell offered thanks to his wife, Samantha, and co-organizer Lisa Sewell for their work. “Without their work in our food bank, this kind of thing is hard to do,” Bell said. “They worked really hard to make this happen.” Although a specific date for the next distribution has not been set, Bell said the group hopes to host another distribution event next month. “Of course, everything like this is based on funding,” Bell said. “If we can get the money together, we’ll be able to give away more food.” Anyone interested in volunteering or anyone wishing to make a financial contribution to the group to help fund food purchases, contact New Beginnings Worship Center on South Boulevard in Brewton or by calling the church office at 809-2463.