Kelly honored for 50-plus years in banking 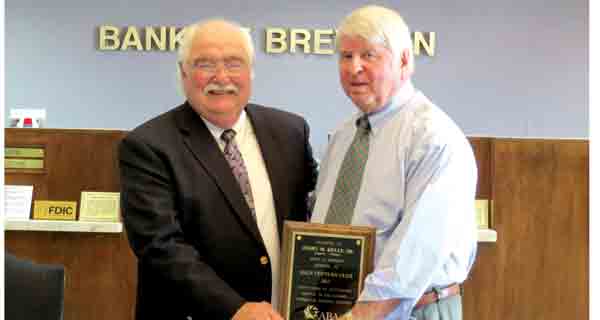 Kelly, right, was honored Wednesday for more than 50 years in the banking industry. Wayne Lambert, left, representing the Alabama Bankers Association, presented a plaque naming Kelly to the “Half Century Club” with the organization.

For more than a 50 years, Jerry Kelly Sr. has been involved in banking. That service was recognized Wednesday with the presentation of a commemorative plaque and employee reception at the main branch of The Bank of Brewton.

Kelly, who has served The Bank of Brewton and its customers since 1968, began his banking career in 1961 working as a teller at The Union Bank in Repton. After a year in the position, the banker would be promoted to vice president at the bank — a position he served in until 1965. After leaving the Repton community, Kelly didn’t go far before finding another home at the Union Bank in Castleberry. While there, he served as branch manager, vice president and member of the board of directors.

Kelly said he has no plans to leave the industry that has given him a long list of accomplishments in a glowing career.

“I am going to be around for a while longer,” Kelly said Wednesday. “There are a few things left that are going to keep me around.”

Wayne Lambert, manager of the Alabama Banking School and representing the Alabama Bankers Association at Wednesday’s presentation, said Kelly was joining an elite group of professionals in the banking industry.

“I met with Jerry back in the spring and we talked about how long he had been in banking,” Lambert said. “I told him then he needed to be honored and become a part of the half century club. He told me then that we didn’t need to do that. Well, I don’t listen very well and we’re here today to present Jerry with this plaque.”

Kelly became the 35th member of the Alabama Banking Association’s Half Century Club and marked his 52nd year in banking this year.

Kelly is a graduate of the University of Alabama where he received a bachelors degree in commerce. He also served as first and second lieutenant in the U.S. Army having been stationed at Ft. Bliss in Lawton, Okla., and at Ft. Benning, Ga.

Family and friends, as well as bank employees, were on hand for the recognition ceremony and reception Wednesday.