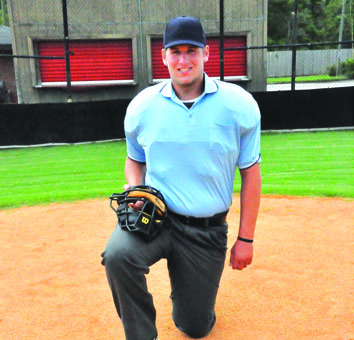 Being a baseball umpire may not be the ideal job for some people. But for Brewton’s Tyler Etheridge, the job that started out as a recreational job has taken him to higher levels.
“I started umpiring when I was 16 while I was working with the Brewton Recreation Department at the Little League park,” Etheridge said. “They would let some of the guys who worked down there umpire the bases if we wanted to. I played baseball for six years through Babe Ruth and I always thought it would be fun to umpire, so I would always volunteer. At first I was nervous and really didn’t know what to think. It was tougher than I thought it would be.”
Etheridge said as he called more and more games, he started getting more comfortable with the atmosphere and began to have fun with it.
“(Other local recreation league umpires) Charlie German and Chris Baxter started noticing how much I enjoyed it and they would teach me some of the mechanics of umpiring like positioning on the field and some of the technicalities that goes along with it,” Etheridge said. “I took to heart what they would tell me and I was always open to listen to any advice or teaching that they would offer me. Coach Baxter told me one day after a game that I should consider getting certified and calling some tournaments on my own. That interested me so I followed up on it. I really didn’t know if I wanted to get certified or not but coach Baxter and Charlie finally talked me into it. I got certified with Cal Ripken and Babe Ruth when I was 17 and I’m really glad those guys kept encouraging me to do it.”
Etheridge said the thing he likes the most about umpiring is the fact that he gets to see a lot of baseball.
“It’s fun to watch a lot of baseball from behind the plate or on the bases,” he said. “I like the fact that I get to know some of the kids throughout tournaments and games too. Some of those guys get to know you during the tournaments and will ask you if you’re calling their next game. It’s really cool.”
While there are things he likes about the job of umpiring, there are also things he does not like that come with the job.
“The one thing I like the least has to be the fans,” Etheridge said. “It’s not the fact that they holler at me, it’s just the ones that won’t ever be quiet. It gets annoying and sometimes it will get to a point where the kids playing will notice it and comment about it. As far as people fussing at me about a call, it doesn’t bother me much. When I first started, people would be yelling at me or the coach yelling, would make me second-guess myself on the call that I made. After I called a few games I realized that most coaches and fans are going to holler and yell whenever things aren’t going their way so I learned to tune it out.”
Recently, Etheridge got the opportunity to call a travel ball (USSSA) World Series in Destin.
“They called and asked if I would umpire and it was a no-brainer,” Etheridge said. “I called the state tournament for the Florida panhandle, so I knew this was going to be a lot of games and a lot of fun. This isn’t like the Little League World Series where there are international teams. At this series, there were teams from all over the south—from Georgia and Tennessee to west Texas.”
Etheridge said each week had a different age group that played for the championship.
“We played from Tuesday through Saturday and would call anywhere from four to six games a day,” Etheridge said. “This was the biggest tournament I had called, but it was also the most fun. I got to know some of the coaches and parents and really enjoyed learning about the different towns that they were representing. I also got to know some the players as well during the games.
“Anyone who loves baseball would have enjoyed this series. There were definitely some up-and-coming athletes that played there. Maybe some that we’ll be watching on TV one day. The tournament was really good the first week and we had really good weather, but we had some trouble during the last two weeks. It rained a lot and the directors had to change the formatting some, but we still got some games in. All-in-all I would have to say it was a successful series.”
While Etheridge is just getting started in the field of being a baseball umpire, he thinks he may have a future with it.
“I see myself umpiring in the future for sure, I just don’t know how much,” he said. “After I get some more experience I want to try to get in the college associations and call some college ball. It’s hard to get in the MLB so I’ll probably stick with high school and hopefully college one day.”
So what kind of advice would Etheridge recommend to those wanting to be an umpire one day?
“The best advice I could give to anybody going into umpiring is make sure you’re ready,” he said. “It’s a lot tougher than everyone gives umpires credit for. I found that out really quick. It’s rewarding, but you can’t go into it half-heartedly. I would recommend anybody who loves the game of baseball to go out and get certified. Especially guys my age who want to make some extra money. There’s good money in baseball and it’s fun as long as you can find some enjoyment in it.”
Etheridge, 19, is the son of Debbie and Phillip Etheridge of Brewton. Etheridge has three brothers and one sister.
Etheridge is currently a student at Jefferson Davis Community College in Brewton and is pursuing a criminal justice degree.