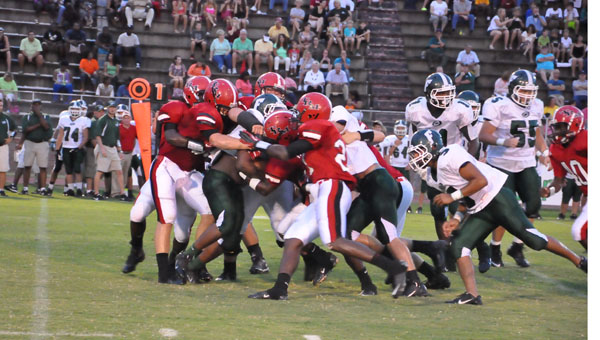 The T.R. Miller varsity and JV Tigers teamed up for a 32-7 win over the Flomaton Hurricanes Friday night in Brewton in a preseason game to help kickoff the 2013 season.
With the game divided up with the first half of varsity players and the second half of JV players, T.R. Miller led Flomaton 26-0 while the JV Tigers were outscored 7-6 in the second half, but T.R. Miller was able to get the overall win by 25 points.
T.R. Miller led Flomaton 14-0 after the first quarter and added 12 points in the second quarter to get the 26-0 win in the varsity’s half of play. In the second half, the only scoring was in the third quarter as T.R. Miller extended the lead to 32-0 before Flomaton broke a 70-yard run on the final play of the quarter to cut the lead to 32-7. Neither team scored in the fourth quarter.
See Wednesday’s paper for a complete game recap.
T.R. Miller will begin their 2013 season Friday when they host the Escambia County Blue Devils of Atmore. Game time is set for 7 p.m. at Brewton Municipal Stadium in Brewton.