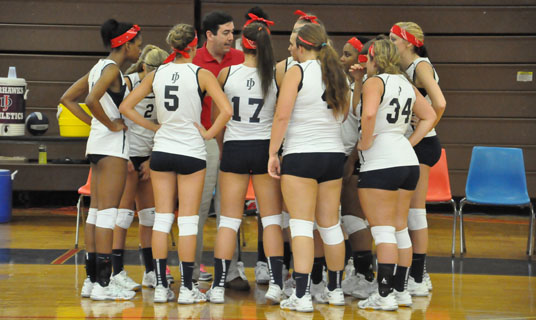 In their 2013 season opener and debut under new head coach Allen Gainer Monday at home, the Jefferson Davis Community College Lady Warhawk volleyball team started the year 0-1 as they took a 3-1 loss to the University of Mobile.
Gainer said despite the loss, and having only one returning player from the 2012 team, his Lady Warhawks played well after being down early in the match.
“I think that is the key for all the girls is that this was their first game,” Gainer said. “Liz McCrary is our only returning player and she didn’t play much last year. So, the first two games tonight, we had a lot of jitters. With all the freshmen, we really have not had time to simulate what a real game is like. They (Mobile) have varsity players they can scrimmage against to see what a game is like. I think we gave a great effort of sticking together and I was really pleased with how hard we played and the intensity and the effort that we gave. We have a tough game Thursday, but hopefully we will keep getting better.”
JDCC lost to the Lady Rams 25-17 in set one and 25-13 in set two to fall behind 0-2. With their backs against the wall, JDCC rallied from a 23-20 in the third set to get a 25-23 win to cut the deficit to 1-2 and force a fourth game.
In set four, JDCC rallied from a 21-24 deficit to tie the game at 24-all, but lost 26-24 to drop the match.
The Lady Warhawks of JDCC will be back in action Thursday at home when they host Wallace-Hanceville at 3 p.m. After two home games, JDCC will hit the road for their next two games before returning to Brewton Thursday, Sept. 5 when they host Gadsden at 5:30 p.m. in Brewton.
See Wednesday’s paper for a complete game recap.