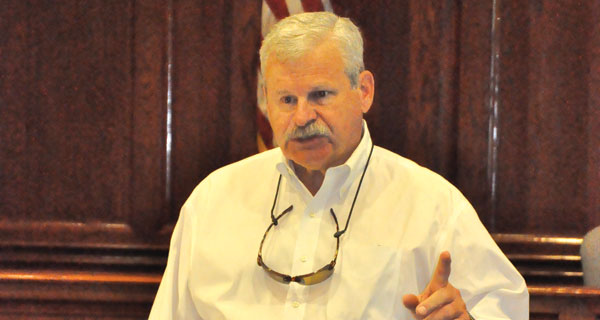 The legalities of where you can carry a gun under a new state law regulating firearms was the topic of discussion for more than business owners, school officials and concerned citizens Thursday at city hall council chambers.

Escambia County Sheriff Grover Smith and retired ATF Agent Bill Blair of East Brewton were the presenters at the meeting.

“For one, I am concerned about a lot of misunderstandings about the law,” Smith said. “I am concerned about lawsuits against employers and I want them aware of the law to protect the rights of the employer and the employees. It is a very complex law and very involved. They changed the gun law from top to bottom. We would have hoped they would have addressed the issues and would have spent time on that, but they basically just went and changed everything. But, in application, I don’t really think they world is going to get turned upside down because we don’t really deal with that much that people are banishing weapons. Most people I deal with are reasonable, we can talk with them and resolve it.”

In the meeting Thursday, Smith told those in attendance that the bill was “a compromise for your right to carry a firearm and also for public safety.”

“One of the things I objected to mostly was that originally in the bill Mr. Beason was insistent on that you could carry a pistol to a public demonstration,” Smith said. “You can envision an Alabama or Auburn football game where they serve beer and everyone has a pistol. Envision a man shoots and kills someone. Both families are in front of the courthouse and they can lawfully be armed. You can go in there and buy your tag, or your wife or daughter or son go in there.”

Smith said the bill changes the gun law in a vast number of ways, but how it affects people in daily life is not that different.

“The bill clearly says you can walk up and down the sidewalk with a pistol on your side,” Smith said. “But, it’s when you take it on the property of others or into a building or in a car that puts you in a spot where you can get crossways with law enforcement. A pistol can be carried in your vehicle only if it is unloaded and locked up, out of the reach of the driver or passenger. That means it can be in the trunk of a car; in the toolbox of a pickup truck or in a lock-box in the back of an SUV. The gun cannot be in the glove compartment or a console of any vehicle. That location just won’t meet the rules of the law. It has to be unloaded in all of those cases. The whole point of the law is to save lives and prevent injuries. That’s always been our goal. And, we will uphold this law as well.”

Smith, who has been sheriff of Escambia County for 10 years, said one issue he has with the new gun law is the area with the school zones.

“I strongly believe school zones should observe federal law (no gun within 1,000 feet),” Smith said. “State law is different. Within a court system, they are going to protect someone who inadvertently brings a gun to school. This only applies to guns on school property as far as prosecuting. You still have personnel rules that say you can’t work there. That is important to remember the distinction between civil and criminal.”

“If someone at a school sees something that looks like a gun at a school, I think they have the absolute right to do something about it,” Smith said. “As officers, we are to do anything to help keep peace. It does not mean arrest people. We have to use common sense.”

In Brewton City and Escambia County schools, signs will be posted to notify visitors that guns are not allowed on campus.

In the meeting Thursday, Blair talked of the new changes. That brought questions to him from those concerned citizens and business owners in attendance at the meeting.

“In order to carry a concealed firearm in your purse or under your coat or anywhere in your car, even if it is laying on the seat, you need a weapons permit from your sheriff,” Blair said. “The new law gives your employees rights. They can carry the concealed weapon as far as the parking lot.”

The new law says you can carry a pistol on another person’s property if you have a permit or have the consent of the property owner.

Blair said business owners who do not want guns on their property need to post a sign saying “no firearms.”

“Even if you have permit for a gun and there is a sign on a business or private land saying no guns allowed, you cannot carry a firearm,” he said. “If you go into a business, with their consent and you have a permit you can carry a pistol. I went to Walmart this morning, that is Brewton’s largest business, and there was no signs up yet there. There was a no smoking sign on the door, but no firearms. If you don’t want people coming into your business with a firearm, you need to post a sign saying no firearms allowed. It is your private property and you can do that.”

Blair said that in general, it is OK to carry a long gun in a vehicle, but if you have a concealed weapon, you have to have a permit.

“It does not matter if your long gun is loaded or unloaded until you take it on the parking lot of your employer,” Blair said. “If you are on the highway going from your house to the store or whatever, your long gun can be loaded. There are exemptions of the federal law about if you drive by a school with a gun. If you are driving to work through a school zone or something like that, the law was wrote to combat gang bangers or drug selling near a school zone.”

Section 4 of the law talks about employers and employees.

“An employee can carry a gun as far as the parking lot,” Blair said. “If they do not have a permit, they can carry a pistol in the parking lot without a permit as long as it is unloaded or stored in a fixed container or in a compartment out of reach of the driver or passenger in the vehicle. If you are in a truck without that compartment, it has to be in a locked boxed or tool box fixed to the truck. You can carry a long gun onto the parking lot if it is hunting season and if you have a valid hunter’s permit and the guns are unloaded. This only applies to people who have never been convicted of a crime of violence, has not mental illness conditions and has no documented workplace incidents involving the threat of a physical injury.”

Section 6 says a person in prohibited from possessing a firearm even if they have a valid pistol permit in:

• a building of the police, sheriff or highway patrol station

• premises of a facility that provides impatient or custodial care to psychiatric, mental or emotional disorders

• Inside a courthouse, courthouse annex, a building housing a District Attorney’s office or a building where a county commission or city council is having a regularly scheduled or specially called meeting.

Smith said he was pleased with the way things went Thursday morning at the meeting.

“It was good,” he said. “It is confusing as you listened to the questions, you can see there are a lot of misconceptions. We would love to speak to every person individually. If any group or any entity or business would like me or Bill to come talk with them how we think the law applies, we would be glad to do it. They are the ones who help pay our salaries.”