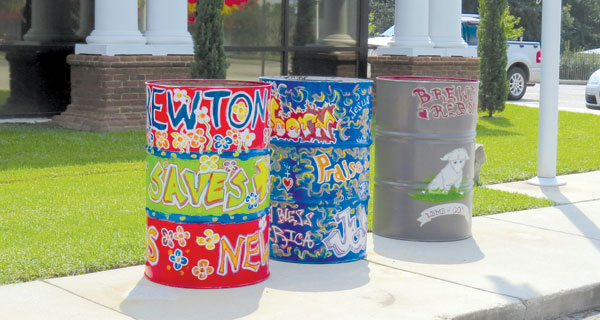 The newest batch of barrels just waiting for delivery around town in the Brewton Reborn project.

Brewton residents have a new list of assignments for September — all aimed at bringing about a rebirth of the community.
Connie Baggett, City of Brewton program director, said the assignments aren’t hard and won’t even require any studying.
“The three things to do this month are plant flowers, use your library and buy from local merchants,” Baggett said. “Those are the assignments in our Brewton Reborn project for September.”
Baggett said planting flowers is an activity that brings beauty to the property of individuals, but can also bring beauty to the city.
“We are encouraging people to plant peonies this month,” Baggett said. “That will give the city some color this spring.”
Using the library is an assignment that can become more than a simple trip to check out a book, Baggett said.
“We have reviewed four books by local authors recently and will be encouraging folks to read those,” Baggett said. “We will have a city-wide reading group that will be meeting each weak at the library to discuss these books. Those meetings will begin next week.”
The Brewton Public Library has books by the four local authors available for patrons of the library.
Baggett said the Brewton Reborn project is also focusing on encouraging area residents to make purchases from local businesses.
“We will be focusing on a different merchant every day on our Brewton Reborn Facebook page,” Baggett said. “We want to encourage people to get out and visit our local merchants to see what they have to offer. There are some wonderful treasures in Brewton if people will only get out to find them.”
Baggett said the project — still in its infancy — is being supported by residents and leaders throughout the community.
“Everybody has been really supportive of the projects and are participating well,” Baggett said. “The trash barrels being placed around town are very popular and a lot of people are using them. We are seeing about 10 bags of garbage being picked up from those barrels every week and that’s trash that could have been floating around on the ground in the city. We have put those barrels in high traffic areas and people are really using them — that’s a good thing. People are continuing to ask about sponsoring a barrel and we’re excited that it has become a popular part of the city.”
Baggett said the Brewton Choo-Choo Market has also been a popular addition to activities aimed at gathering people together, which is the main focus of the Brewton Reborn project.
“The Choo-Choo Market is very successful,” Baggett said. “Every day we are getting more people ready to participate and we’ve had many more people who are getting out and shopping with the vendors at the market.”
Another popular activity in the project has been the Top of the Town, which has resulted in recognition of special people in the community.
“We have seen so much support for this activity,” Baggett said. “People are actually greeting each other more and we have seen people furiously voting for folks in the Top of the Town. We haven’t seen a single person nominated that didn’t deserve the title.”
Baggett said the Lemonade Brigade would continue to be a tool aimed at encouraging folks in the community to get out of their homes and onto the porches and sidewalks in the community in an effort to have more conversations and more interaction among residents.
“We have found a lot of people walking outside and getting out of the house to visit,” Baggett said. “That is the whole point of a lot of the things we’re doing with this project. We want people to get out and maintain some human connections with their neighbors and reconnect with the town. We want people to take ownership in Brewton and have some pride in our city. This is our city and we can make it what we want to make it. But, you can’t do that sitting home alone. We want people to be out and be a part of the community.”
To learn more about the Brewton Reborn project and what you can do to participate in any of the planned events, contact Baggett at Breton City Hall at 809-1777.