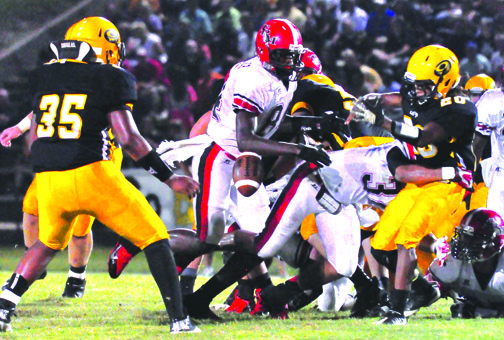 If T.R. Miller’s football team, particularly its defense, is bent on making a statement, certainly Friday night provided a pretty good forum.
And while last week’s season-opening victory over Escambia County High School offered a glimpse of the new “physicality” of this team, last night’s 22-7 Region 1 win at Opp defined it much more clearly.
The message: there’s tough … and then there is Tiger Tough.
Even when Opp (1-1, 0-1) scored with a little more than nine minutes to go in the game to make it a 15-point deficit; and even when fourth-ranked T.R. Miller (2-0, 1-0) got a 44-yard return of the ensuing kickoff, only to fumble the drive away at the Bobcat 16-yard line a few plays later, Chris Baxter’s defensive unit never flinched. After allowing the hosts to convert one first down, three plays later McHenry Coleman knocked down a pass to force a punt and allow the Tigers to run the clock out to gain the victory.
The Tiger defense created four fumbles, recovering three, and held Opp’s ground game to just 65 yards on 36 carries and 66 yards through the air. In all, Opp only had 44 offensive plays as nine of their 10 possessions either ended with a lost fumble or a punt.
“We’ve really worked hard at creating turnovers and playing real physical on defense,” said Baxter, the Tigers’ defensive coordinator. “As a unit, we are running to the ball, and when you’re able to gang tackle and you look up and there’s 11 Miller jerseys chasing the ball it makes a difference.
“Our players have really bought into this attitude of playing physical and running to the ball. It’s not always pretty,” he added with a grin, “but our kids are playing real hard and showed tonight how they prepared for this game.”
Offensively, the Tigers gave the defense some breathing room early, scoring on their very first offensive play of the game when senior quarterback Keion Smith lofted a perfectly time pass to Kellyn Winn, who took it 62 yards to the house.
“I was very pleased with the effort,” said Tiger head coach Jamie Riggs. “Opp is a very good football team and some things they do on offense concerned us, but our guys really tackled well and didn’t give up that big play.
“Good things happen when you use your helmet and shoulder pads, and we did that pretty well tonight,” Riggs continued. “Certainly, it’s still early and we have a lot to work on but we’re making progress. One thing we will have to correct is finishing drives. We had the great kickoff return midway through the final quarter and fumbled it away. Down the road, something like that can hurt you so protecting the ball and scoring in a situation like that will be important.”
T.R. Miller went with its grueling running game, which chipped away for 194 yards on 42 rushes while completing two passes for an additional 82 yards, including that big home run from Smith to Winn. McHenry Coleman led the way with 56 yards, while Dominique Jackson added 52, 23 coming on a touchdown run in the second quarter.
When the Tigers had to punt on their second and third possessions, they forced fumbles on Opp’s first play each time. Caden Lodge recovered the first one and opened the door for T.R. Miller to take a two-touchdown lead. Thanks to a determined 13-yard run by Kameron Coleman on third-and-9 from the Opp 36, Jackson took the next carry 23 yards for the touchdown. The PAT attempt failed, but a penalty on the Bobcats allowed T.R. Miller to try a two-point conversion, which Kameron Coleman converted to make it 15-0.
Following the second fumble, which was recovered by Tripp Floyd at the Opp 31, it took six plays before Smith scrambled to the one on fourth down, then snuck it in to finish the scoring drive. Chardian Johnson’s second PAT made it 22-0 with 8:26 to go in the half.
“I’m really proud of the effort our kids gave tonight,” said Riggs. “Like I said, we’ve got plenty of things to improve, but you can’t help but be happy when your team plays with such emotion.”