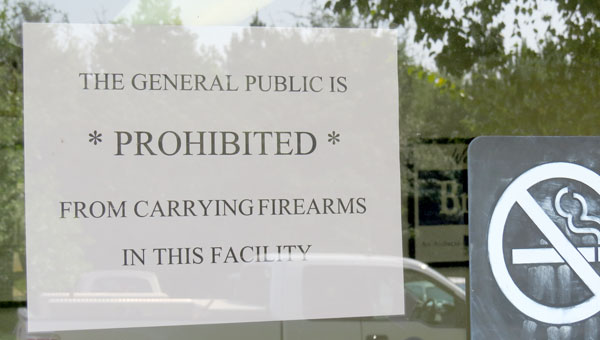 Signs like this one posted at Brewton City Hall will become a common site at city and county facilities.

Escambia County Commissioners designated a number of county-controlled buildings as annexes Monday — a move that will allow them to prohibit firearms and other weapons from being brought in by visitors.
“In order to be able to protect our employees and the public, it is a wise move to designate annexes to be included in prohibiting guns in the building,” County Administrator Tony Sanks told commissioners.
Commission Chairman David Stokes agreed saying the designation of certain buildings would further allow officials to protect everyone.
“All of the properties that we control will be designated as annexes,” Stokes said. “That will be done for the purpose of not allowing guns in those places.”
Sanks said signs will be purchased and erected as soon as possible to further inform the public of the prohibited items in the facilities.
“These buildings included in the designations are owned by the county and can be designated as an annex,” Sanks said. “Typically, if we had one facility large enough to house all of these departments, they would be in one place. But, since we are spread out, those buildings housing those departments are considered annex locations to the Escambia County Courthouse.”
The reason for the annex designations is to more clearly define the facilities owned and/or operated by the Escambia County Commission and to give authorization to erect or affix notifications for the prohibited items, Sanks said.
“There is no clear authority in the new law to authorize prohibition of firearms in public buildings,” Sanks said. Although some buildings already fall into specified facilities that can prohibit firearms and weapons, “the simplest way to address the issue seemed to be the designation of buildings as annexes.”
City of Brewton officials are also looking at postings that would alert the public concerning the use of firearms at municipal facilities.
City Clerk John Angel said postings have already been put into place at Brewton City Hall.
“We have already posted a sign strictly prohibiting firearms at city hall,” Angel said. “Other department heads will be posting a notice to that effect at other facilities.”
Other city operated facilities include the Pro Shop at Dogwood Hills; Brewton Public Library; Brewton Fire Department; and the City of Brewton Public Works Department.
Alabama law already prohibits the carrying of firearms in a number of facilities and locations maintained by public officials, Sanks said.
“Currently, the law prohibits firearms in a police/sheriff’s/highway patrol station, on the premises of a prison, jail, halfway house, community corrections facility, or other detention facility,” Sanks said. “Firearms are also prohibited inside or on the premises of a facility which provides inpatient custodial care of those with psychiatric, mental or emotional disorders; inside a courthouse, courthouse annex, a building in which a District Attorney’s Office is located, or a building in which a county commission or city council is currently having a regularly scheduled or specially called meeting.”
Sanks said the installation of signs in the previously- and newly-designated annex facilities would further inform the public about items prohibited in those locations.