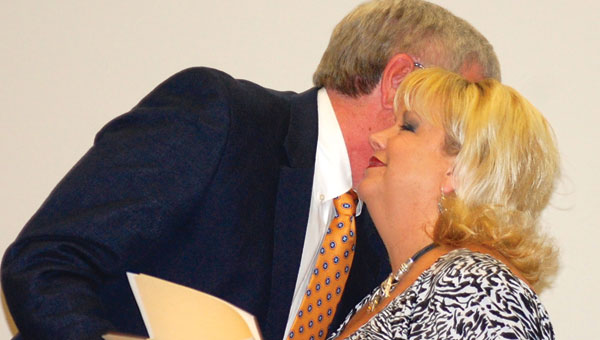 Late Brewton councilman Dennis Dunaway was honored Monday by his former colleagues for his dedication to public service.
Dunaway, who served as a councilman for 12 years over two separate terms in Brewton, was also owner of WEBJ radio.
Mayor Yank Lovelace said the city wanted to use a resolution to recognize Dunaway, who died in July after a long illness, for his “faithful and conscientious service” to the city.
“Dennis served, contributed and shared in the growth and progress of the city in his lifetime,” the resolution reads.
Dunaway’s wife, Jan, and daughter, Chandler, were on hand for the recognition.
The city also took time to recognize two other residents for their contributions to Brewton.
The Rev. Willie J. Blue and Brandi Deere tied in voting for the city’s last “Top of the Town” award for August. The Top of the Town awards were presented as part of the city’s “Brewton Reborn” campaign.
Blue and Deere were recognized for their hospitality and friendliness. Blue, the pastor of Second St. Siloam Baptist Church, is involved with the John L. Fisher Community Center. Deere works with youth at the Brandi Deere Foundation.
Lovelace also presented a proclamation to attorney John Jernigan in recognition of Pro Bono Week.
In other business:
• Lovelace appointed a committee of council members Frank Cotten, Bill Littles and Fred Barton to seek a replacement for Brewton City School Board member Terrill Neal, who resigned after moving to California temporarily.
• Lovelace appointed a committee of council members Cotten, Pat Poole and Joe Watson to consider two vacancies on the recreation board.
• The council approved two amendments to the city’s land use ordinance regarding cell phone towers. The amendments will give the city greater power to regulate new cell phone towers in the city, said community development director Steve Yuhasz.