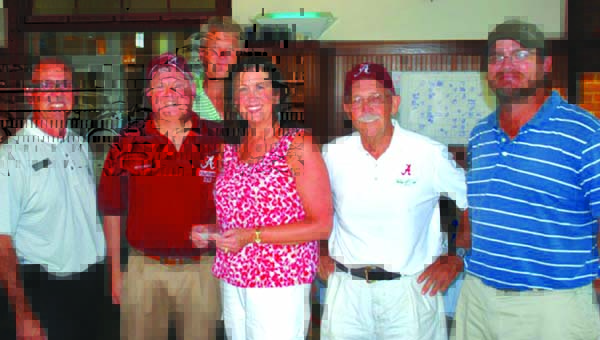 Special to the Standard
First place winners in the Walter Lewis golf tournament Thursday was the Bank of Brewton team. From left, Don Ward, Russell Smith, Dr. Bob Hayes and Kevin Terrell. Also in photo are, far left, Don Beardsley, manager of the Country Club of Brewton and middle, Miriam McDaniel, President of the Escambia County University of Alabama Alumni and Friends.

The 10th annual Walter Lewis golf was held Thursday afternoon at the Country Club of Brewton and the Bank of Brewton team took first place.
The Bank of Brewton team consisted of Don Ward, Russell Smith, Dr. Bob Hayes, and Kevin Terrell.
The second place team was Vulcan Industrial Contractors and consisted of players Garry Caperton, Jack Slocum, Lucas Douglas, and Rob Bussey.
The third place team was Thompson, Garrett and Hines with players Clifford Watson, Melvin Davis, Mike Wilsome, and Josh White on the team.
Closest to the pin winners were Jack Slocum on hole No. 17 at 12 feet and Rob Faircloth at No. 4 at 5 feet.
“The event was a success with all proceeds going to the Walter Lewis Endowed Scholarship Fund which provides scholarship assistance to local high school seniors to attend the University of Alabama,” Escambia County Alumni Association president Miriam McDaniel said. “Our long term goal is to be able to provide a full scholarship package in the near future.”
Although he could not stay the whole day, Lewis showed up at the tournament to thank those who attended this year’s event.
“I would like to say that this has been a great event for just people locally,” Lewis said. “I have seen kids benefit from it. For us to give three area scholarships to people who earned them to the University of Alabama has been great. I was actually up there last spring and saw one of the girls who was a receipient. She was senior and she was doing her studies and it was just an encouragement to me. It is great to have people out in the community to come out and support it and give us their resources to support an event like this.
“I am very grateful to be part of it.”
Since 1995, the Walter Lewis endowed scholarship fund has awarded over $35,000 to outstanding area high school seniors to help pave the way for their education at the University of Alabama.
Participation in this annual tournament helps assure the continued funding and success of this scholarship fund
Escambia County Alumni Association.