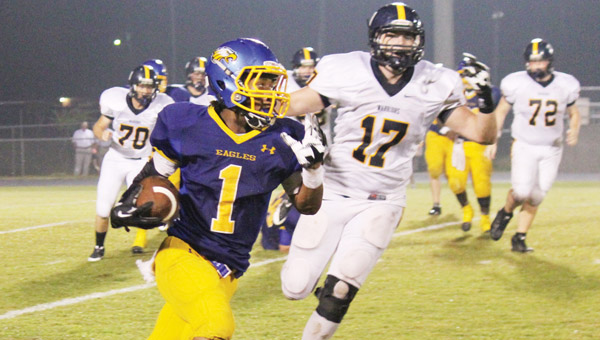 Despite heavy rain for much of the second quarter, true blue Neal fans stayed in the stands to watch the Eagles trounce the Warriors of Cottage Hill Christian Academy 48-2 at home Friday night.

The win gives Neal a 2-1 overall record and improves them to 1-1 in region play.

The Eagles hit the ground running, scoring on the second play of the game, when sophomore Quenton Samuels hustled 68 yards down the field for a touchdown with only 58 seconds having ticked off the clock. Fellow sophomore Malcolm Hawthorne ran across the goal line for the two-point conversion, giving the Eagles an early 8-0 lead.

In the first quarter, Neal’s defense managed to keep Cottage Hill from making a single first down, while the offense steadily moved down the field. Despite an interception, that stopped a solid drive on the Eagles’ second possession, Neal needed only three plays to move the ball into the end zone on their third possession. Malcolm Hawthorne ran 32 yards for the touchdown with 3:50 left in the first quarter. The conversion attempt was no good, giving the Eagles a 14-0 lead.

Early in the second quarter, the Eagles fumbled a snap in the end zone, giving Cottage Hill a safety and their only points for the night. With 8:28 left to play in the half, the score was Neal 14, Cottage Hill 2.

Neal punted the ball to Cottage Hill, and on a second down and ten, Warrior quarterback Cole Butler threw a pass that was intercepted by junior Quante Barksdale. On the next play, Hawthorne rushed 80 yards for a touchdown, followed by a successful conversion run by Samuels, giving the Eagles a 22-2 lead with 7:00 left in the second quarter.

Once more failing to make a first down, the Warriors were forced to punt, setting the Eagles up for another score. Neal used seven plays to move 81 yards, ending with a 33-yard touchdown run by Samuels. The conversion was no good, and the Eagles went up 28-2, with 2:33 left in the half.

Cottage Hill received the ball first after halftime, and was able to hold onto it for seven plays before turning it over on downs on the Eagles 27-yard-line. Four plays later, Samuels was sprinting 52 yards for a touchdown. The conversion attempt was not successful, but with 5:08 left in the third quarter, the Eagles led 34-2.

After an incomplete pass and only 5 yards of rushing, the Warriors punted the ball to the Eagles, and on the next play, Samuels rushed 79 yards for another touchdown. Hawthorne then hit junior Trey Taylor in the end zone for the two point conversion. With 1:58 on the clock in the third quarter, the Eagles were up 42-2.

Moving into the fourth quarter, the Warriors turned the ball over on downs, and the Eagles’ Chavers threw an interception. On the first play of their possession, Cottage Hill quarterback Cole threw a 23-yard pass that was intercepted by Eagle Quante Barksdale. Neal quickly converted that into a touchdown as freshman Peyton Salter ran one yard across the goal line for the score. The conversion attempt was not successful, but with 2:30 left in the game, the Eagles pulled ahead 48-2.

The Warriors had one more possession before the buzzer sounded, but they were unable to capitalize on the opportunity, and Eagle fans left the field, soaked from the rain, but happy with the win.

When asked about some of the younger athletes who were seen making plays, Hoehn said, “Yeah, everyone got to play tonight, and that’s a good thing because those kids work hard, and we’re happy for them.”

Next Friday, W.S. Neal will play Southside Selma in Montgomery. Kickoff is set for seven p.m.