QB is ‘Kie’ to success for Miller 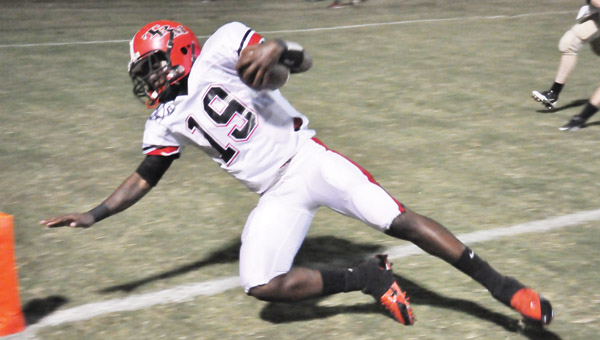 EXCEL—After not having trailed all season and not having allowed a single point in the first half all season, the T.R. Miller Tigers found themselves in unchartered territory Friday night in Excel — but not for long.

After striking first on a 1-yard run from quarterback Kieon Smith to go on top 6-0 after a failed PAT with 9:13 left in the first quarter, Excel marched right down the field to grab a 7-6 lead with 4:18 left in the quarter.

From there it was all T.R. Miller as the Tigers scored four straight touchdowns to end the first half and the first of the second half to turn a 1-point deficit into a 35-point lead.

The Tigers led Excel 14-7 after the first quarter before adding 21 points in the second to build a 35-7 halftime lead. In the third quarter, T.R. Miller outscored the Panthers 13-7 and added a touchdown in the fourth quarter to get the 40-point region win.

“I am proud of the team for winning,” T.R. Miller Tiger head coach Jamie Riggs said. “This has been the most physical Excel team that we have played. They have some size and they did a good job of running the ball and their quarterback is a pretty accurate throwing the ball. They gave some issues throughout the game and they can run the ball with their three good backs. At times they knocked us off the ball and did some things. I thought we did a nice job on offense and did a nice job of spreading the ball around in the second quarter.  We got some points on the board and that was a big deal.”

As for the five straight touchdowns and the 36-point swing in points to give his Tigers the momentum in the game and propel them to the win, Riggs said you have to score points to win the game.

“We felt they were a stronger offensive team than they were a defensive team,” Riggs said of the Panthers. “We knew we needed to score some points to win the game. There was two or three things we did well on tonight. Our quarterback did a nice job tonight getting on the outside and making some plays for us and making some big throws. I thought we blocked a lot better down there in the second quarter. We were able to run the ball down there some. You have to be able to do that some and score on them when they score. We made a few kicking game plays with a great punt return and a great kickoff return. Those things are important.”

In the win, seven of the nine Tiger possessions began in Excel territory while the best field position of the night for the Panthers came on back-to-back drives with them starting at their own 35-yard line.

The Tigers racked up 385 yards of total offense with 296 coming on the ground on 34 carries and 89 coming in the air.

Excel had 89 yards rushing on 33 carries and had 96 yards passing.

He was 8-for-12 passing for 89 yards and had a touchdown pass to Jackson.

Jackson led the Tiger receivers with one catch for 32 yards and a score. Kameron Coleman had three catches for 27 yards.

Overall with the win now, T.R. Miller improves to 4-0 against the Panthers of Excel and have outscored them 222-27 in the four-game series.

T.R. Miller will host Bayside Academy next week after playing on the road for two straight weeks.