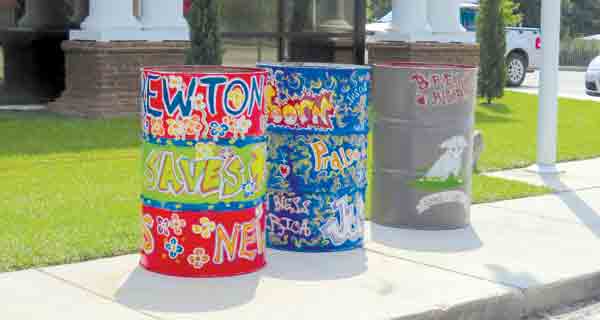 Barrels, like the ones shown here, are located throughout the city in high-traffic areas to help eliminate litter in the community. The barrels are part of the ‘Brewton Reborn’ project now underway in the community.

In an effort to keep our city streets clean, Mayor Yank Lovelace asked residents and businesses to join forces using Brewton Reborn barrels and persuasion to keep litter in its place.

“Often the first thing industrial scouts see is how clean a city is as well as its overall appearance,” Lovelace said. “If we can translate the excitement we feel, the wonderful charm of our close-knit neighborhoods and the way we all love Brewton into action, that is a great step forward.”

More Brewton Reborn barrels will be deployed along city streets in the coming weeks, officials said, and surveillance cameras will be used to catch litterers in the act in some problem areas.

“We won’t let a few people who don’t respect themselves or our city ruin things for all of us,” Lovelace said. “Great cities show it by pulling together and clean streets is an easy way to make a memorable first impression.”