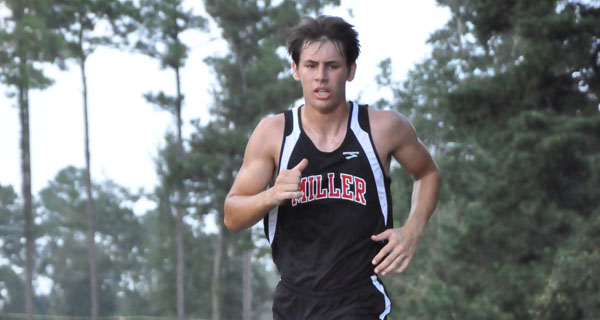 A little rain could not dampen the three-team cross country meet Tuesday afternoon at Brewton Middle School for the T.R. Miller Tigers as they took first place overall for both the boys and the girls races.
Joined by Flomaton and Northview, the T.R. Miller teams took the sweep in a prep race for a bigger meet scheduled for Saturday, September 28 at 8 a.m.
In the meet Tuesday, T.R. Miller’s boys came in first place with 24 points while Northview took second with 50 points and Flomaton finished third with 102. In the girls race, T.R. Miller was first with 17 points and Northview was third with 76. Flomaton took third place.
For the T.R. Miller boys, the top-seven runners were led by Christian Carlson’s overall first place finish with a time of 19:24. Micah Flores was fourth overall with a time of 21:43 and Travis Carlson was the third T.R. Miller Tiger to come across the finish line and seventh overall with a time of 21:48.
Dillan Simmons was fourth for T.R. Miller and eighth overall with a time of 22:46 while Noah Morris was 10th overall with a time of 24:29.
Stewart Campbell was sixth for the Tigers and 11th overall with a time of 24:44 while Nash Diercks was 12th overall with a time of 25:11.
For the T.R. Miller Lady Tigers, Katie Nelson was the first girl to come across the line and second overall in the race with a time of 19:49.
Allie Nelson was third overall and the second Lady Tiger to cross the line with a time of 21:19. Kelsi Lum took 16th overall with a time of 26:14 while Tarah Townsend was 21st overall with a time of 26:46.
Auburn Schoonover was the fifth Lady Tigers to cross the finish line with a time of 27:45 for 22nd overall. Sarah Byrd was 29th overall with a time of 28:58 while McKena Gleaton was 35th overall and the seventh Lady Tiger to come across the line with a time of 30:04.
While the course at BMS is not a great course for good times, T.R. Miller cross country head coach Rob Atkinson said he was pleased with the way his team ran at the meet Tuesday.
“Our runners ran really hard today,” Atkinson said. “I was really impressed with Katie Nelson. She ran probably the toughest race she has ran in her life today. She ran a time of 19:49, but you can take a minute off of that with this course and it probably around an 18-minute time for her. That is incredible for her. Christian Carlson had a really good run and our younger runners on coming along. Kelsi Lum ran well and Tarah Townsend did well also. I am very pleased with them. We definitely improved some today. This was basically a practice run, but I am pleased with how we did today.”
The run Tuesday was setup and run through of how the bigger home meet would get for the September 28 meet the school is hosting.
“It went really well today,” Atkinson said. “Basically we just wanted to see how ready we were for next Saturday. That is all it is to it. I see a few problems we need to fix, but the course was well-marked and ready to go. I see some problems with parking, but we are going to take care of that. This was perfect and where we needed to be for the real event. We hope everyone comes out and sees the race in a few days. There is no charge. Most folks have never seen a cross country meet and this is where they need to come. It is great. You can view a cross country race better here than anywhere else.
As of right now, 10 teams—with possibly more coming— are expected at the September 28 meet at Brewton Middle School. The race is expected to see over 400 runners.
Several teams are coming from Mobile and north Florida.
The start time for the girls will be at 8:30 a.m. and the boys will be at 9:15 a.m. There will be a JV girls and boys after that at 9:45 a.m. 10:15 a.m. respectively. That race will be a two-mile race. The awards will be after that at 10:45 a.m.
Brewton Middle School is located on US 31 North. The address of the school is 1384 Old Castleberry Road.
Trophies will be awarded to the first and second place teams in the varsity and JV divisions. The top-10 in each varsity race will receive Columbia dri-fit shirts.