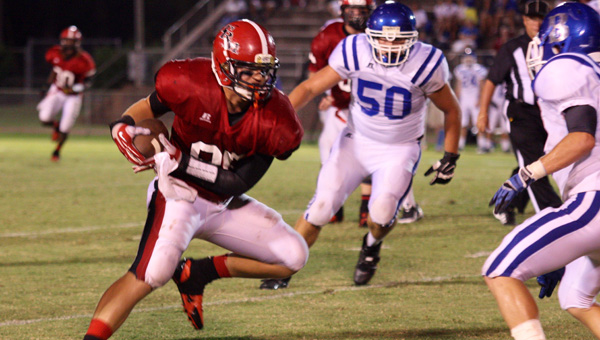 In a key class 3A region 1 battle in Brewton, Bayside Academy’s Colin Douglas missed a game-tying 44-yard field goal with 13 seconds left in the game and the No. 3-ranked T.R. Miller Tigers held on for a 43-40 region win over the Admirals.

T.R. Miller head coach Jamie Riggs promised a “battle” against Bayside this week: “We will need to play the best game of the year so far, so that is what we need to get prepared to do.”

Little did he know how true those words were.

“First of all, I am glad I took my blood pressure medicine this morning,” Riggs said. “I should have doubled up on it though, if I would have known this. This was a great game between two great teams who both very badly wanted to win this game. Both teams wanted to win very, very badly. We have great, great respect for them and I think most of our fans have great respect for them after tonight. I am just real proud of our guys. We had a lot of things happen during the game that wasn’t good, but we just kept playing. We win the game, but have an idea that the war is not over.”

The two teams totaled over 1,000 yards of total offense in the back-and-forth game Friday.

T.R. Miller led Bayside 14-10 after one quarter of play and 21-20 at the half after Bayside fumbled the ball at the goal line with seconds left before the half.

T.R. Miller would lead by as many as 35-26 in the quarter, but Bayside Academy cut the lead to 35-3 heading into the fourth.

T.R. Miller answered late when quarterback Kieon Smith hooked up with Kellyn Winn on a 31-yard pass play to take a 41-40 lead with 3:48 left to play.

The Tigers went for the two-point conversion to help them grab a 43-40 lead.

On their final drive, Bayside Academy converted two late fourth down plays but found themselves at the Tigers’ 27-yard line with 20.1 seconds left and no timeouts.

From there, Douglas’ field goal went wide left and T.R. Miller ran out the clock for the win.

Riggs said his team was going to have to put up some points Friday to help get the win.

“We knew we were going to put up some points tonight,” he said. “I knew if we kept getting the ball to our guys that they would make some plays down there. (Quarterback) Kieon (Smith) made some nice throws down there and made some nice plays. They were having some trouble with our boots a little bit and we got some big plays out of that.”

“They obviously hurt us with some things, especially in the first half,” Riggs said. “We tried to make some adjustments at halftime and I think a couple of things we did helped us. But they are so diverse on offense and they are so outstanding and they are so quick that they caused us enormous problems. We did some great things at times. It does not look like it, but we did some great things. We stopped them and made them kick some field goals three different times and I am just real proud.”

While his defense surrendered a lot of yards Friday night, Chris Baxter’s squad came up with some big stops to help seal the win.

The win Friday for T.R. Miller made their record over Bayside 4-2. The teams have played six times with T.R. Miller scoring 196 points and Bayside scoring 167.

“If you can beat Bayside, you have done pretty good,” Riggs said.