Neal pulls away in second half over Southside Selma 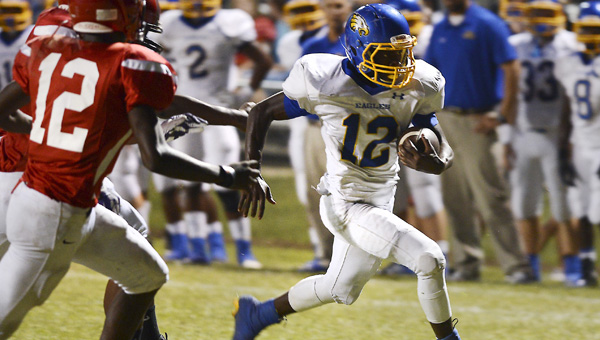 SELMA — After a close first half, the W.S. Neal Eagles pulled away from the Southside Panthers for a 43-14 victory Friday in Selma.

The Eagles got on the board first with a 9-yard scamper into the endzone by Quenton Samuel, but it wouldn’t be his only score. Samuel led the Eagles offense with nearly 200 yards rushing, three rushing touchdowns and one receiving touchdown.

The final minutes of the second quarter included a flurry of points by both teams. With a little more than three minutes left in the second quarter, Southside’s Derrick Daniels broke two tackles and turned a 38-yard punt into an 80-yard touchdown. The Panthers made the two-point conversion to take the lead 8-6.

W.S. Neal scored on the following drive on a 5-yard run by Malcolm Hawthorne and made the two-point conversion.

The special teams unit again came up big for Southside when De’Quan Jones returned the ensuing kickoff 53 yards to the 9-yard line.

The Panthers scored on a 14-yard pass to Daniels to tie the game at 14 points each.

W.S. Neal pulled away in the second half with three touchdowns from Samuel, including runs of 27 and 36 yards and a 12-yard touchdown reception.

“We told our kids at halftime ‘It’s 14-14, this is anyone’s ball game,” Hoehn said. “These kids played their hearts out.”

The Eagles also scored on an interception return by Hawthorne in the final seconds to seal the victory.

Southside head coach Daniel Flowers said his team played well in the first half, but missed several chances to come back in the second half.

“We just didn’t capitalize on opportunities,” Flowers said. “It was simple things like catching the ball. We have to keep fighting, keep battling and hustle a little bit more.”

W.S. Neal improved to 3-1 with the win and to 2-1 in region play. They will travel to Hillcrest-Evergreen next week for a non-region game.

Southside will travel to Orrville next week to take on in-county rival Keith.