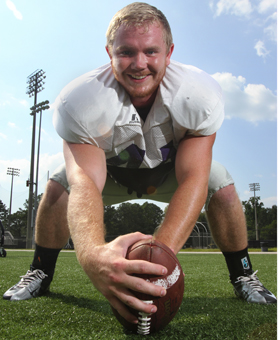 Former T.R. Miller Tiger Mabry Cook is gearing up for his fifth and final season at the University of North Alabama.
In a story by Jeff McIntyre, Assistant Sports Editor at the Times Daily in Alabama, Cook has endured position changes, injuries and other setbacks during his playing career, but never gave up.
Cook is the starting tight end and will also handle all the snapping duties on punts and place kicks.
“I’ve had my trials, but I’ve loved playing at UNA,” Cook said. “I come to work hard every day and want to leave a good legacy for UNA. It’s more about the team than myself. I just want to be the best tight end and long snapper I can be to help the team win games.”
Cook was recruited initially by former UNA coach Mark Hudspeth. When Hudspeth left and was replaced by Terry Bowden, Cook was still pursued by UNA and signed with the Lions.
When Bowden brought in more than 20 Division I transfers in the fall of 2009, almost all of the incoming freshmen were redshirted. That was fine with Cook, who used the redshirt season to his advantage.
“I really appreciated that redshirt year because it allowed me to get in the weight room to get bigger and stronger,” Cook said. “There was a lot of great talent here that year. Guys like Preston Parker and Michael Johnson. Just going against those guys on scout team was a lot of fun.”
Cook spent his redshirt season playing tight end on the scout team. He saw his first game action in 2010 and made three tackles on special teams.
He hoped to see more playing time in 2011, but he suffered nerve damage in his shoulder and missed part of the season. Cook played in eight games that season and had two tackles.
Cook admits is was tough to work so hard only to see little playing time.
“No doubt it was hard at times,” he said. “When Coach Bowden was bringing in all of the Division I transfers, you wondered if you were ever going to get your shot.”
Cook was excited when Bobby Wallace returned to coach at UNA after Bowden left for Akron. He moved back to linebacker during the spring of 2012 and remained there at the beginning of the 2012 season.
But early in the year, the coaches moved Cook back to tight end. He ended up starting five games and made his first career catch against Tarleton State.
Cook’s hard work and dedication have earned him the admiration of his teammates and coaches.
“First of all, Mabry is a great person and a great student,” Wallace said. “He has persevered over the years, and we finally found a position for him at tight end. He’s physical, he’s smart, and he wants to be good.
“Mabry is invaluable to the team as a tight end and long snapper. That’s one of the good stories of coaching football — a guy like Mabry that has persevered enough and hung on enough to get this opportunity.”
The Lions hope to make more use of the tight end position this season, so Cook might see more passes coming his way. While he would love to see that happen, Cook doesn’t worry about individual statistics.
“I hope to be used more, but if not I don’t mind doing the grunt work,” he said. “I’ll get in there and block every play if I need to. I’ve enjoyed playing tight end in this offense, and I think we’re going to have an exciting season.”
Cook will graduate in December with a degree in business management and plans on working with a construction company. He will leave UNA with his degree, along with a lot of satisfaction from sticking to his dream of playing college football.
“There were some tough times, but I never considered giving it up,” he said. “You either love it or you don’t, and I love it.
“I’m very proud of what I’ve accomplished and what this team has accomplished. UNA is built on tradition. I love that I chose to come here and that I stuck with it. I couldn’t be happier.”
Cook graduated from T.R. Miller in 2009.
McIntyre granted The Brewton Standard permission to re-print Cook’s story.