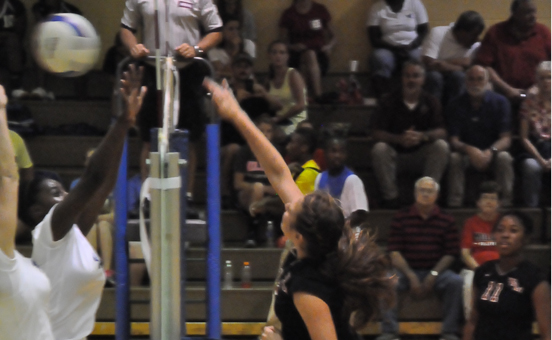 While the lightning was popping outside W.S. Neal gymnasium Tuesday night, the fans inside were just as electric as a record crowd saw the T.R. Miller varsity Lady Tigers take down the W.S. Neal Lady Eagles 3-0 in an area contest for both schools.
In the varsity matches, T.R. Miller won 25-12, 25-22 and 25-15 to improve to 7-3 overall and to 2-3 in area play. The loss for W.S. Neal dropped them to 3-4 overall and to 0-2 in area play.
T.R. Miller Lady Tiger head coach Greg White said rallying to win set two after being down 20-14 to W.S. Neal, helped propel his team to the win.
“Winning game two was huge,” White said. “We were behind the whole time and were down six or seven points at one time. I told the girls in the huddle just to stay in the game and take one point at a time. Amelia (Peach) did a great job of serving and we tied it up and went ahead by two. Winning that game was huge and we had all the momentum going into game three. Neal fought in game three and it was back-and-forth, but never pulled away there at the end. It was a good, hard-fought win, but the win in game two was what sprung us forward to finish off game three.”
While the win in set two was beneficial for T.R. Miller, it was just the opposite for W.S. Neal.
“First off again, T.R. Miller head coach Greg White has a great team over there,” W.S. Neal head coach Jason Blaney said. “They are an athletic team and very senior-led. That is really what you want and they played well. I think when you are up, and we were up by five or seven, and to let them come back it really hurt. But Miller hustled back and won that. It slows you down a little bit. We had a tough time receiving serves today. We will work at and see what we can do.”
As for the crowd turnout at the game, White said it was good for both schools.
“Again, give it to both schools for the crowds tonight,” he said. “They both brought a lot of folks out and it was good to see this for high school volleyball in the area. It brought a lot of intensity out tonight and probably was the biggest crowd I have ever been part of since I have been here. I want to thank both schools for getting the fans here. Our fans have been at the last four games for us and they have been awesome. It was a good win for us and we just need to keep it going.”
Blaney said he thought the crowd was ‘electric’.
“I have never seen that many fans in our gym, or any gym for that fact for a volleyball match,” Blaney said. “We have been working hard to get fans out there and they really are starting to come out and give the ladies a lot of support. We even were able to get the drum line out there, which I would like to thank (band director) Mrs. (Kim) Waller. Miller also brought a lot of fans and it was just awesome the atmosphere in the gym. Our girls have never played for that many so I think it took them a little bit to get used to the hype and emotion of having such a great turnout. We are going to keep working at getting fans out to games and the girls will take care of business on the court.”
In other games Tuesday in East Brewton, the Brewton Middle School Lady Tiger volleyball team improved to 10-0 with a 2-1 win over W.S. Neal Middle School. WSNMS fell to 7-2 this season.
In set one in middle school action, W.S. Neal won 25-23 before Brewton took set two 25-10 and the deciding third set 15-4.
In JV action, T.R. Miller won 2-0 to improve to 5-3 while W.S. Neal fell to 2-4.
T.R. Miller took set one 25-20 and set two 25-12.
T.R. Miller will host Cottage Tuesday at Brewton Middle School in JV and varsity action at 5 and 6 p.m. while BMS will play J.U. Blacksher.
W.S. Neal will host Pleasant Home Monday in middle school, JV and varsity action. Game times will be 4,5, and 6 p.m. and the matches will be played at W.S. Neal High School.

TRM varsity 3, WSN 0
In varsity action, T.R. Miller picked up their second win over W.S. Neal this season and finished off the Tiger sweep Tuesday as they took down the Lady Eagles 3-0.
In set one, T.R. Miller won 24-12.
A power outage in set one delayed the match 18 minutes. The outage occurred with T.R. Miller up 9-5 over W.S. Neal.
For the Lady Tigers, Moriah Brundidge led with six service points. For W.S. Neal, Karissa Johnson led with two points.
In set two, W.S. Neal let a 20-14 lead slip late in the game and T.R. Miller took a 2-0 lead with a 25-22 win.
For the Lady Tigers in the second set, Amelia Peach led with seven service points, two aces and one kill.
For W.S. Neal, Johnson led with four points a long with Madison Winchester.
In the third set, Krystal Bell and Brundidge both led with four points and one ace.
Tykeria Nolan led W.S. Neal with three points.