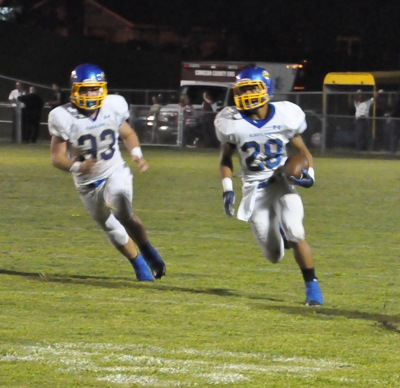 Evergreen—When he was looking ahead to Friday night’s game, W.S. Neal head football coach Doug Hoehn called Hillcrest Evergren the best 1-3 team he had ever seen.

Couple that with the Eagles’ having troubles with turnovers and penalties Friday night at Brooks Memorial Stadium, and the Jaguars earned themselves a 21-12 homecoming win over W.S. Neal to stun the Eagles and their fans.

W.S. Neal had three fumbles in the first quarter, one returned 60 yards for the first score of the game, as the Jaguars used a 14-0 lead at the half to help propel them to the nine-point win.

Leading 14-0 at the half, Hillcrest built a 21-0 lead with 9:46 left in the third quarter before W.S. Neal scored two late touchdowns to cut the deficit to nine points. Hillcrest would recover an Eagle onside kick late in the game and run out the clock for the homecoming win.

“Hillcrest is a good football team and a very physical football team,” Hoehn said.” We didn’t play our best tonight, but I don’t want to take anything away from Hillcrest because they are a good football team. They played very well tonight. You can’t turn the ball over. We had four turnovers tonight and they had one. That and penalties…you just can’t do it. You can show up and play hard, but if you have those turnovers and penalties, you are not going to beat a team like that. They had one turnover and maybe two or three penalties.”

Overall, W.S. Neal finished with 236 yards rushing on 60 carries. W.S. Neal had no passing yards in the loss. The Eagles had 15 first downs, but had only five in the first half.

Hillcrest finished with 135 yards of offense with 91 yards coming on the ground on 29 carries and 44 yards coming on one pass completion for a touchdown. The Jaguars had eight first downs in the win.

Also for the Eagles Friday night, Malcolm Hawthorne had 51 yards on 25 carries. Hawthorne was 0-for-1 passing.

With the loss, W.S. Neal fell to 3-2 overall at the midpoint of the season while Hillcrest improved to 2-3 with the win.

W.S. Neal will be back in region play next week and at home when they welcome the Excel Panthers to W.S. Neal Stadium for Homecoming 2013.

Game time is set for 7 p.m. with festivities planned throughout the day.