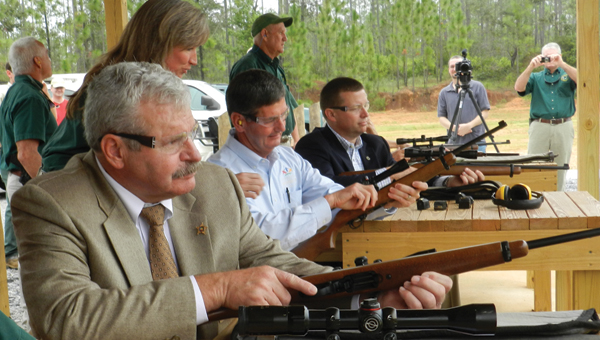 The official opening ceremonies were barely over Thursday before the new shooting range in the Conecuh National Forest was in use.

“This is needed,” said Buddy Bradley, who is one of the nearest neighbors in the remote area of the county. “This is a good way for people to use the National Forest.”

Bradley said the site of the new range was first surveyed 18 years ago. At the time, there was a range on Highway 137.

But that range, which operated for about 35 years, was closed for safety reasons in January 2011, USDA Forest Service District Ranger Tim Mersmann explained.

The old facility was closed with intentions of making improvements to it, he told the crowd gathered for the opening of the new range. But concerns about residents down range prompted a move. Mersmann said the Forestry Service and the Alabama Division of Wildlife and Freshwater Fisheries partnered to create the new range, and looked at seven sites before choosing this one off County Road 4.

On Mersmann’s first week on the job in January 2012, the County Road 4 site was chosen.

“We look forward to a long future of hosting happy shoots,” he said.

Gary Moody of the Wildlife and Freshwater Fisheries Division of the Department of Natural Resources said all of the improvements – like all of the work of the DNR – is funding by licenses and fees paid by hunters and fishermen.

“Shooting is a safe activity that can be enjoyed throughout life,” he said, adding that the range in the Conecuh is the state’s 12th public shooting range.

“There will be more recreation on these two or three acres than most public lands,” he said.

Also on hand were Sheriff Grover Smith, who said his department will offer firearms training classes for women at the new facility, and Commissioner Raymond Wiggins.

Directions from Brewton: Take Alabama Highway 29 north to County Road 4, turn east and travel approximately 11 miles; entrance to the shooting range will be on the right.