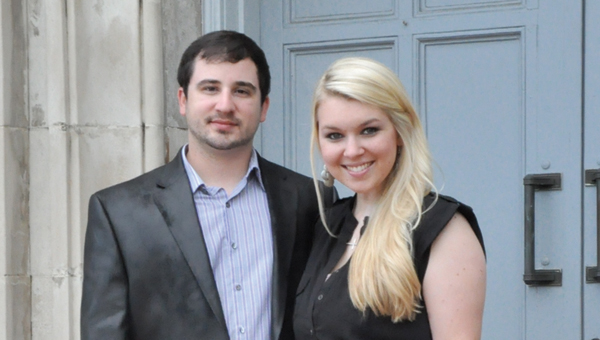 Going into the Air Force was the path Josh Coates thought he would take, but God had other plans.

Those plans have led Josh and his wife Brittany to Brewton, where they are the new pastors of Cornerstone Community Church, located at 401 Belleville Ave.

Josh’s father is a pastor, and Brittany’s parents are also in the ministry.

“I wasn’t really living for God,” Josh said. “I was like a lot of people that grew up in church and believed in God but haven’t fully put my faith in Him like I should have. I was just trying to see what was out there and discover the world. I ignored my faith and God really convicted me of that two months after I turned 18. It was in February and I went to the altar during a revival at our church and I made my faith personal there and God called me to preach. That totally changed my direction. I had planned on going into the Air Force and even talked to recruiters because I was in my senior year of high school. That was going to be my path, but when God saved me, He changed everything.”

A 2008 graduate of Southeastern Bible College near Birmingham, Josh said he set his course from that moment of being in the ministry.

“Pastoring has really been my heart ever since the beginning,” he said. “It was what I knew God was calling me to do and the doors of opportunity He has opened up until this point have been in youth ministry.”

After working at several churches, the couple had the opportunity to come to Brewton.

“We didn’t even know where Brewton was,” Brittany said. “We didn’t know if it was in Alabama or not.”

After being contacted by the state office, Josh and Brittany drove through and looked at the area. “We saw it was a beautiful town and a beautiful church,” Josh said. “One thing that stood out to us was the small-town atmosphere here and the loving people that just have a close-knit personality here.”

Josh said that identified with Brittany and himself.

Brittany said while the two may look young, she wants people to be open about coming to Cornerstone.

“I know Josh and I look really young and we may not give off the appearance of being experienced as far as pastoring, but Josh and I both grew up in this and he is very well-educated,” she said. “We are here to make a difference.”

“We want Cornerstone Church to be such a blessing to Brewton that we would be missed if we were gone,” Josh said. “That is really what we want to do is to be a blessing to the community. We want the church to be a refuge for people. We don’t want it to just go after the whole pieces, but after the broken pieces. If we had any kind of motto, we want it to be a refuge. That really speaks to our vision of doing outreach. To really contrast how great it can be to live for God and to be a child of God and how awesome that is.”

As for a vision for Cornerstone, the two say they have many.

“One of those we are starting off the bat is a program called Plus One,” Josh said. “That is based off the passage in Matthew were Jesus talks about the 99 and says the Good Shepard leaves the flock of 99 to go find the one. As I was reading that passage three weeks ago, God spoke to me and said that was His heart — to seek after the one. That vision that God gave me, I feel that God was giving me that for the direction of our congregation. I started a program of outreach called Plus One. It is still in the beginning stages. I just got the idea three weeks ago and we have only been here four weeks. We are just now starting, but the idea is for our congregation to become more outreach-minded and focus on the individual.”

With the idea of outreach comes misconceptions, Josh said.

“Some times we look as outreach as mass production, but I don’t see that as the way Jesus intended it to be,” he said. “He wanted it to be personal connections built on individual relationships. That is the approach we are taking with it. We are focusing on the people who are broken, who have been hurt, people who may have been offended or never been reached with a gospel message or people churches may have overlooked. We want to be the church who opens their doors and their arms and their heart to those in the community—especially for those who need it the most. What we have been challenging our congregation to do is focus on one person who does not know the Lord. Just find someone and build a personal relationship with them. Let that person be their Plus One. That has been our thrust over the last month.”

Sunday school starts at 10 a.m. and worship starts at 10:45 a.m. at Cornerstone. The first Sunday of the month there is a Sunday night service at 6 p.m. and is typically a small group setting with not a traditional church service. Wednesday evening services are held at 7 p.m.

Bain on administrative leave from JDCC; interim leader in…