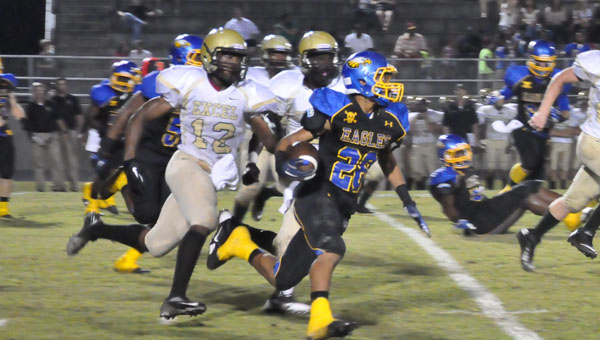 Quenton Samuels had a big night for W.S. Neal.

W.S. Neal’s Quenton Samuels racked up 407 rushing yards on 23 carries and scored five touchdowns for the Eagles of East Brewton as they cruised to a 46-8 region and homecoming win over the Excel Panthers.

Zack Haveard had the other score for W.S. Neal as he scored on an 8-yard run in the second quarter to put W.S. Neal up 16-0 on the Panthers.

W.S. Neal led 8-0 after the first quarter and 16-0 at the half. In the third quarter, W.s. Neal jumped out to a 24-0 lead before Excel scored their lone points of the game with 6:00 left in the third quarter. W.s. Neal would outscore Excel 24-8 in the quarter to take a 40-8 lead into the fourth. In the fourth, Samuels added his final touchdown of the night on a 69-yard run to help give W.S. Neal the 38-point win.

Excel finished with 114 yards of total offense in the loss with 72 coming on the ground and 42 in the air.

The Eagles of East Brewton will travel to face the Bayside Academy Admirals next week in a key class 3A region 1 showdown. Game time is set for 7 p.m. in Daphne.

See Wednesday’s edition of the Brewton Standard for a full recap of the Friday’s game along with a preview of the game with Bayside Academy. Also, see what W.S. Neal head coach Doug Hoehn had to say about the homecoming win and what Samuels had to say about his big offensive night.