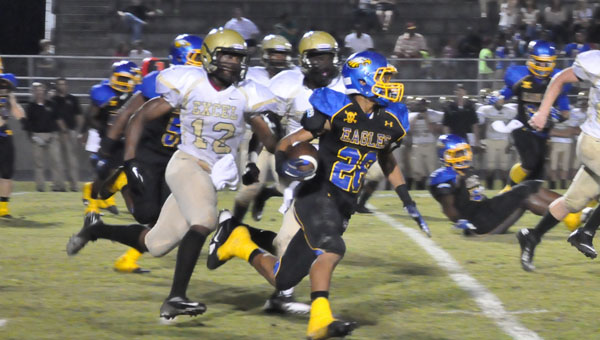 Samuels rolled up more than 100 yards on his first four carries and finished with 410 yards, with touchdown runs of 74, 17, 60, 52, and 69 yards, on 23 carries to lead W.S. Neal to a 46-8 victory. The Blue Eagles ran away with the victory, despite finishing with zero passing yards, thanks to Samuels’ explosive running plays.

For his performance, Samuels is this week’s ASWA Offensive Player of the Week, as he edged Jacksonville’s Dominique Thomas and Berry’s Terrance Hollingsworth to capture this week’s award.

This week’s Defense/Special Teams Player of the Week is Houston County’s Jarive Whyte. He returned a punt 80 yards for a touchdown, recorded two interceptions and had six tackles in a 32-8 victory over Ariton. He also excelled on offense, catching six passes for 149 yards and a touchdown.

The two finalists for the Defense/Special Teams Player of the Week are Center Point’s Khalil Garrison and Marion County’s Ready Swanigan.

Here’s a list of other stellar performances from this week:

D.J. Bailey, Valley: Ran for 152 yards and four touchdowns on 39 carries and added an interception on defense in a 27-26 win over Eufaula.

Hayes Battles, Houston Academy: Rushed for 188 yards and two touchdowns on 30 carries, had an 88-yard kickoff return for a touchdown and had four receptions for 75 yards in a 40-30 win over Cottonwood. On defense, he had five tackles a caused fumble.

Kaleb Barker, Priceville: Completed 8-of-15 passes for 266 yards and three touchdowns, and ran for 119 yards and two more scores on 13 carries in a 42-13 win over East Lawrence.

Jordan Bentley, Guntersville: Ran 26 times for 173 yards and two TDs, his 19th and 20th touchdowns of the season.

Daylon Brackett, Jacksonville Christian: Threw for 281 yards on 20-of-34 passing for two touchdowns and rushed for 210 yards on 19 carries and three more touchdowns in a 58-32 loss to Gaylesville.

Marlon Bridges, Lanett: Ran for 273 yards and two scores on 19 carries in Lanett’s 25-14 win over Isabella.

Jermarcus Brown, Pickens County: Scored on runs of 22 and 40 yards, caught a 40-yard touchdown pass and scored on an 80-yard kickoff return in a 70-6 win over Parrish.

Logan Campbell, Cold Springs: Rushed 28 times for 269 yards and three TDs, including a 70-yard sprint to the end zone in the second half, in a 42-22 win over Francis Marion. He also was 2 of 2 passing for 40 yards and had 33 return yards to finish with 342 all-purpose yards.

Ryan Carpenter, Colbert County: Rushed for 209 yards and 7-yard TD on 29 carries in a 24-7 win over Lauderdale County, as the Indians secured win No. 600 in program history.

Garrett Crider, Cullman: Rushed 22 times for 164 yards, including a 5-yard touchdown run early in the second half to build the Bearcats’ lead en route to a 30-7 victory over Russellville.

J.J. Dancy, Smiths Station: Rushed for 154 yards and three touchdowns on 15 carries in a 45-12 win over Lee-Montgomery on Thursday.

Blake Devine, Southside-Gadsden: Rushed 12 times for 146 yards and two touchdowns to go along with a 31-yard scoring reception in a 45-25 win over Arab.

Quint Dobbins, Anniston: Threw for 343 yards on 16-of-24 passing and five touchdowns in a 40-39 loss to Jacksonville. Dobbins recorded 215 yards and three touchdowns in the fourth quarter, after Anniston was down 40-18.

Caegan Epperson, West End-Walnut Grove: Rushed for a game-high 249 yards and two touchdowns on 15 carries in a 41-14 loss to North Sand Mountain.

Brontae Harris, Hanceville: Ran 17 times for 175 yards and three touchdowns in the Bulldogs’ 27-7 home win over Winfield. He completed a 25-yard pass to Dant’e Reese in the fourth quarter and scored on runs of 1, 5 and 87 yards.

Sammy Harris, Spanish Fort: Caught seven passes for 156 yards, including the game-changing 57-yard TD pass on a fake punt, in a 29-6 victory at St. Paul’s.

William Ignont, Buckhorn: Ran for 120 yards and scored three touchdowns, including the 12-yard game-winner with 22 seconds remaining in a 35-28 win at Sparkman. Ignont, a freshman, also scored on runs of 3 and 10 yards.

Marquise Irvin, Madison County: Hauled in scoring catches of 62 and 65 yards in a 48-13 win over Pope John Paul II.

Rayshon Kennedy, Houston County: Caught 11 passes for 174 yards in a 32-8 win over Ariton.

Garret Lewis, Sipsey Valley: Completed 12 of 16 passes for 200 yards and four touchdowns in a 42-35 loss to Northside.

Kris Lewis, Fultondale: Totaled four touchdowns in a 44-13 win over Pleasant Valley. Lewis ran for 80 yards and two scores (10 and 29 yards), threw a 47-yard touchdown pass and returned an interception 46 yards for a score.

Chris Manning, Section: Carried nine times for 186 yards and three touchdowns in a 43-21 victory over Ider. Manning scored on runs of 68, 32 and 44 yards. The 68-yarder was on the first snap of the game.

Brody Meeks, Lynn: Had 427 yards of offense and five touchdowns in a 78-38 loss to Marion County. He rushed 19 times for 178 yards and three touchdowns. He also completed 16-of-30 passes for 249 yards and two touchdowns.

Luke Phillips, St. Luke’s: Passed for three touchdowns and ran for another as the Wildcats beat Marengo 44-32. Phillips completed 15-of-18 passes for 198 yards.

T.J. Pratt, Hubbertville: Rushed for 164 yards and a touchdown in a 27-0 win over South Lamar.

Matthew Putman, Lexington: Accounted for four TDs — one passing and three rushing — in a 33-8 win over Hatton. Putman passed 27 yards for one score and had TD runs of 4, 6 and 71 yards.

Tristan Quinn, Hackleburg: Caught seven passes for 140 yards and three touchdowns,and also caught three 2-point conversion passes in a 45-34 win over Vina. His TD catches were for 20, 40 and 20 yards.

Kordell Rudolph, Etowah: Finished 14-of-21 in passing for 271 yards and two touchdowns in a 24-20 loss to Scottsboro.

Cooper Sellers, Houston County: Completed 21-of-27 passes for 401 yards and two touchdowns and added a rushing touchdown in Houston County’s 32-8 win over Ariton.

Devonte’ Simon. Pickens County: Threw for 222 yards and three touchdowns and scored on a 1-yard run in a 70-6 win over Parrish.

Ryheem Sistrunk, Loachapoka: Ran for 185 yards on 14 carries and scored four touchdowns in a 42-0 win over Winterboro.

Bailey Strong, Fairview: Caught five passes for 104 yards and two touchdowns, kicked two extra points and had 31 yards on his one kickoff return in a 36-34 victory over St. Clair County. Strong’s scoring receptions covered 31 and 42 yards.

Chandler Taylor, Alabama Christian: Was 14-of-15 passing for 356 yards, four touchdowns and one interception in a 49-8 win over Bullock County.

Racean Thomas, Oxford: Rushed for 117 yards and three touchdowns in three quarters of Oxford’s 49-7 win over Lee-Huntsville. Thomas had 210 all-purposes yards and added a punt return for a score.

A.J. Travis, Northside: Rushed for 277 yards on 33 carries and scored three touchdowns in a 42-35 win over Sipsey Valley.

Jase Trotter, Oakman: Totaled 271 yards of offense and three touchdowns in the Wildcats’ 41-7 win over Sulligent. He completed 7-of-14 passes for 167 yards and two touchdowns. He also rushed for 104 yards and a score.

Dalton Wiggins, Ranburne: Threw for 249 yards on 10-of-17 passing and four touchdowns in a 33-27 double-overtime win over Woodland.

Hakeem Woods, J.O. Johnson: Returned a kick 60 yards for a touchdown and scored on runs of 1, 6 and 11 yards in a 49-6 win at previously undefeated Ardmore.

Chris Wooten, Highland Home: Scored six touchdowns in a 62-35 win over New Brockton. Ran eight times for 129 yards and five scores and caught three passes for 69 yards and one touchdown.

Jake Averhart, Corner: Led the defense with 14 tackles in the 21-18 win over Oak Grove.

Jaquez Bolling, Central-Hayneville: Returned a fumble 20 yards for a touchdown and caught a touchdown pass in a 38-12 win over Zion Chapel that snapped Central’s 56-game losing streak. Central’s last win was 34-26 over Francis Marion on Oct. 12, 2007.

Weston Bonner, Berry: Had 11 tackles and scored three touchdowns in a 34-26 win over Brilliant.

Caleb Butler, Enterprise: Finished with 13 tackles and caused a fumble, while helping Enterprise hold Northview to just 103 total yards and 1-of-14 on third down conversions in a 38-2 win.

Robert Cooks, McAdory: Led the defense with eight tackles and two interceptions in the 21-6 win over Fairfield.

Brendan Donovan, Enterprise: Recorded 15 tackles, six solos and one for a loss, and also recovered a fumble, helping Enterprise hold Northview to just 103 total yards and to 1-of-14 on third-down conversions in a 38-2 win.

Michael Fraebel, Fort Payne: Scored on a 22-yard interception return, and on a 2-yard run set up by his 60-yard kickoff return in a 33-0 win over Boaz.

Ja’leen Hicks, Muscle Shoals: Picked off a pass late in the fourth quarter to set up the clinching touchdown in a 24-9 win at Hartselle.

Marlon Humphrey, Hoover: Returned the opening kickoff 83 yards for a touchdown, and added a 21-yard punt return and five tackles on defense, in a 48-7 win over Bessemer City.

Ben Ivey, Spring Garden: Recovered a fumble and snagged an interception in the Panthers’ 47-22 victory at Woodville.

Trace Johnston, Trinity: Scored on a 36-yard punt return and an 85-yard kickoff return in a 61-16 win over Thorsby.

Darshaun Jordan, Sparkman: Returned the game’s opening kick 90 yards for a score and caught a 15-yard pass for a touchdownand in a 35-28 loss to Buckhorn.

Jacob Parker, Westminster Christian: Recorded 12 tackles, including two for a loss in a 41-12 win at Clements. He also ran eight times for 82 yards and a TD, caught four passes for 103 yards and a score, and threw a 28-yard touchdown pass.

Timmy Parker, Hamilton: Had two interceptions in a 19-7 win over Vinemont.

Rashad Roberson, Oneonta: Had a 65-yard punt return for a touchdown and another 65-yard touchdown return of a free kick in the Redskins’ 51-0 victory over Cleveland. On defense, he had four tackles and broke up two passes.

CJ Savage, Piedmont: Returned a punt 80 yards for a touchdown and also caught a 24-yard touchdown pass in the Bulldogs’ 68-13 victory over White Plains.

Collin Sheffield, Marengo Academy: Had eight tackles in a 58-6 win over Meadowview Christian.

Charles Tatro, Hanceville: Had two fourth-quarter sacks for a unit that finished with 12 total tackles for loss and two forced and recovered fumbles in a 27-7 victory over Winfield.

Corey Williams, Spring Garden: Posted eight tackles and a sack in the Panthers’ 47-22 win over Woodville.

Nathan Young, Hubbertville: Had 10 tackles, including three for losses, in a 27-0 win over South Lamar.