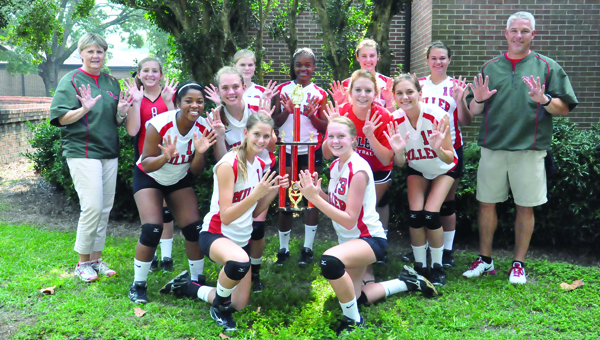 For the ninth straight year, the T.R. Miller Lady Tiger volleyball team swept through their county competition to claim another Escambia County Tournament championship Saturday at Jefferson Davis Community College in Brewton.
T.R. Miller, who has won the tournament every year since it began in 2005, went 3-0 to claim the title. Flomaton finished in second place with a 2-1 record followed by Escambia County of Atmore in third place with a 1-2 record. W.S. Neal finished in fourth place with an 0-3 record. Overall, T.R. Miller improved to 11-5 with the three wins while W.S. Neal fell to 5-11 with their three losses.
“Number one I want to thank coach Allen Gainer and JDCC for allowing us all to use this facility again,” T.R. Miller head coach Greg White said. “It is good for the girls to play on a college court and it is exciting for all teams and I just want to thank him for letting us do that. Overall we played pretty well today. We had a few spurts where we didn’t serve well today as I would have liked. Over the course of the day, I felt like we had a net advantage in every game. I think over the course of the day that may have been an advantage for us and the difference in us winning it. We did a good job of hitting the ball over the net today.”
In the tournament games Saturday, T.R. Miller opened play with a 2-0 win over W.S. Neal. The Lady Tigers took set one 25-15 and set two 25-10.
In the second game of the day, Flomaton defeated Escambia County 2-0 as they took wins of 25-11 and 25-22.
In the 11 a.m. game between T.R. Miller and Flomaton, the Lady Tigers won 2-0 as they grabbed a 25-16 and a 25-18 win.
At noon, ECHS defeated W.S. Neal 2-1. W.S. Neal won set one 25-21 before falling 25-22 and 15-7.
At 1 p.m., T.R. Miller defeated ECHS 2-0 to claim the tournament championship. T.R. Miller won set one 25-17 and set two 25-13.
In the final match of the day, W.S. Neal lost to Flomaton 2-1. W.S. Neal won set one 25-19 before falling in set two 25-18 and set three 15-7.
“I told the girls it was a big deal,” White said of winning nine straight county tournament championships. “Anytime you can win nine straight in any sport is pretty cool and a pretty big accomplishment. I told them to not get complacent as a returning person and don’t just assume it is an automatic thing. I told them they have to work hard during the off-season and during the season. I congratulated the older ones for keeping it going and we hope to do that for a while. It is going to take a lot of hard work and something we look forward to every year.”
W.S. Neal head coach Jason Blaney offered congratulations to T.R. Miller, but said his team did not have a good day.
“I want to say congratulations to Miller on hosting a very nice tournament and for them winning their ninth straight county tournament,” he said. “It is a nice job that coach Greg White does over there with that program. It was not our day at all today. You bring eight girls and when a couple of them are not here it throws off the whole thing. We really struggled today putting together a complete match and even a complete set. Against Flomaton in set two we are up 6-1 and in the third set we are up 3-1 and we just can’t capitalize. We still just have to work at it and hopefully we can figure it out before the area tournament.”