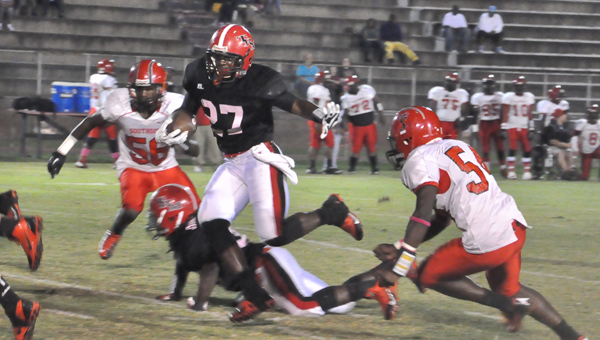 Dressed in black jerseys with pink numbers and wearing the names of people affected by cancer on the backs of their jerseys Friday night for their Legacy Homecoming Game, the T.R. Miller Tigers jumped out to a 34-0 first quarter lead over the Southside Selma Panthers and cruised to a 54-14 win. T.R. Miller led the Panthers of Southside 48-0 at the half before being outscored 14-6 in the second half, but was able to come away with the 40-point region win.

“We started fast tonight and we need to,” said T.R. Miller head coach Jamie Riggs. “We just felt like tonight if we played we played real well in the kicking game tonight, that would give us good field position and we made some plays early. We were able to make a few blocks early and then we were able to get them stopped and made them punt and we just played really well in the first quarter and got the lead. We got to play everybody in the second half and that was nice.”

While Riggs was glad of the fast start for his team, Southside Selma head coach Daniel Flowers was not.

“On our road trips, we have been on the road a lot, we seem to come out better in the second half,” Flowers said. “It just seems like it takes us getting knocked around before we decide to play. T.R. Miller is a great team with a great coach. I just thought our guys would have played better in the first half. I think all this and the scenery had them fooled for a little bit. At halftime, the guys played and would not give up. But for T.R. Miller, their whole team and their coaching staff did a good job tonight. Our guys are probably a year or so away.”

The Panthers were held to 169 yards of total offense with nine first downs. Southside had 117 yards rushing in the loss on 28 carries while getting 52 yards in the air.

At the half, with T.R. Miller up 48-0, the Tigers had 217 yards of total offense while Southside had 61. The Tigers held a 14-3 advantage in the first downs category.

T.R. Miller had nine players see action running the ball with Ahmaud Taylor leading the way with 52 yards on 12 carries and two touchdowns.

Tamerick Jenkins finished with 50 yards on 10 carries while Jalen Jones had 41 yards on three carries and scored on a 36-yard run.

Kellyn Winn had two catches for 26 yards in the win while Chandler Brown had one for 23 yards and Jackson had one for 13 yards.

For Southside Selma, Jhalandius Sullivan led in the rushing category with 60 yards on 10 carries and had a 49-yard score for the Panthers’ first touchdown of the night to cut T.R. Miller’s lead to 48-8 with 6:59 left in the third quarter.

Quarterback Khamari Gibbs added 51 yards on 10 carries and had a 5-yard touchdown with 6:26 left in the game.

Gibbs finished 5-for-13 passing with 52 yards and one interception. All Gibbs’ passes were to different receivers.

“It has been a great last two days,” Riggs said of the homecoming festivities and Legacy Game events that honored the Yancey Jernigan Foundation in Brewton.” Last night was terrific with the Legacy touch football game. Then all this with the Yancey Jernigan Foundation…it has just been great. It has been great weekend for everybody and I just hope it brought everybody a little closer together.”

T.R. Miller will be back in action Friday night at home in a big region game against No. 5-ranked Straughn. The Tigers of Straughn defeated Excel Friday night 26-13 in Excel to improve to 6-1 overall and to 5-0 in region play. Straughn’s lone loss of the season came in week one to 4A’s ranked Andalusia by a score of 12-6.

Selma will take on Excel next week in Selma. Excel fell to 2-5 overall and to 0-5 in region play after their loss to Straughn Friday.