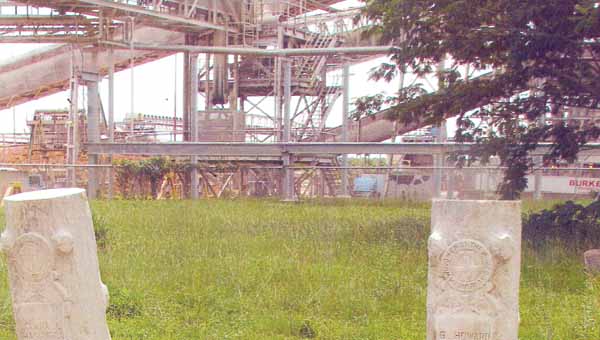 Tucked amid overgrown grass and towered over by industrial buildings, a century-and-a-half-year-old private cemetery sits on the Georgia-Pacific campus in Brewton.

Now GP officials are going through the process of getting permission to move the more than 50 headstones and remains of Franklin Cemetery to Brewton’s Union Cemetery.

GP and cemetery officials called the effort a “win-win” because it would provide a more peaceful — and accessible — resting place and also open up four more acres at Union Cemetery for new plots.

“This is not an ideal resting place,” GP spokeswoman Suzanne Anderson told Brewton City Council members Monday night. “Our goal is to relocate it to a more peaceful, tranquil place that is more easily visited by relatives and history buffs.”

Part of GP’s plan is to move the graves and the remains to Union Cemetery, where officials estimate they would need about a third of an acre for the plots. There are 50 headstones, and perhaps more unmarked graves at the site.

In looking at available land, GP and cemetery officials identified some unused land — but it currently has a drainage ditch running through it.

Attorney Helen Kathryn Davis, representing GP, said the company has offered to fix the drainage ditch, which would give Brewton four more acres at Union Cemetery.

Descendants of those buried in Franklin Cemetery can get access to the site, but it is difficult; they must go through safety training and wear safety gear, Davis said.

The Brewton City Council gave its permission Monday night to GP to move the cemetery, but the company must now seek approval from the Escambia County Commission and the Alabama Historical Society, and give notice to the state board of public health.

GP officials have also spoken to several of the descendants and are trying to find more. Many have been supportive — including a 97-year-old woman who said she would like to be able to visit her great-grandparents’ graves more easily. Others have not been supportive, but Davis said GP is hoping to explain the situation more clearly to get that

“We have consulted with experts and are working to track down the descendants,” Davis said. “Leaving things as they are is not going to be a solution.”

Dr. Bob Hayes, chairman of the city’s cemetery committee, said he is in favor of the move. Additional acreage would give Union Cemetery 1,740 new plots, he said.

“We have wanted to fix the drainage for years,” he said. “But it’s going to cost a lot of money.”

If approved, the graves moved to Union Cemetery would sit in their own corner, likely with a fence around them and with a historical marker.

The graves, which are deteriorating and even broken in some cases, would also be restored.