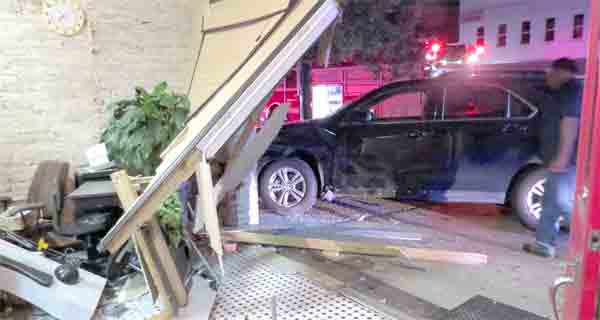 The front entrance of a downtown salon sustained major damage in a two-car crash Friday night.

The only major injury sustained in a two-vehicle accident downtown was the storefront entrance area of the Kut N Up salon.

Witnesses at the scene of the crash that happened just after 7 p.m. say the driver of one of the two vehicles may have become disoriented at the Mildred Street crossing of the CSX railroad tracks.

According to those witnesses, the vehicle became trapped on the inside of the rails just before the crash occurred. The driver apparently tried to free the vehicle from the tracks by accelerating quickly. That move threw the vehicle from the tracks and into southbound traffic. The then-freed vehicle slammed into another SUV vehicle and both vehicles then slammed into the front of the storefront near the breezeway to the boardwalk area in downtown Brewton.

Brewton Police and Brewton Fire Department personnel were on the scene and say none of the occupants in either vehicle were injured in the incident.

The salan, however, did not fare as well. The entire front entrance to the store was damaged with shattered glass and equipment strewn about the front area of the business. The salon was not open at the time of the incident and no employees were in the building at the time of the crash.

For more on the story, see the Wednesday edition of The Brewton Standard.