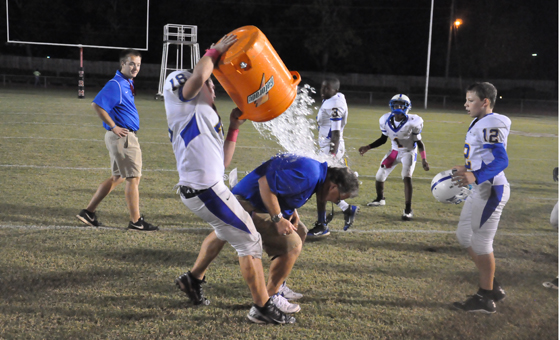 After going 5-0 in their first five games of the season, only one win stood in the way of W.S. Neal Middle School head football coach Chuck Phillips, his staff and his team Thursday night for an undefeated and perfect 6-0 record.
Four quarters later, the Eagles of East Brewton achieved the perfect season with a 20-6 win over the Brewton Middle School Tigers. BMS fell to 4-3 with the loss.
“I cannot be more proud of these guys,” Phillips said after getting a Gatorade bath from his team Thursday. “They bought into everything we wanted to do in the spring. I knew I had a special group and they worked their tails off. They got better from game one to game six. A perfect season is hard to do. I told them we had to play it one game at a time. One game at a time…we never mentioned it until today really. The kids did everything I asked them to do and I could not be more proud.”
After a scoreless first quarter for both teams, W.S. Neal led Brewton 6-0 at the half after Jacobey Hawthorne hit Matt Hutchins for a touchdown with 6:12 left in the second quarter.
In the third quarter, Marvin Maddox took the opening kickoff back 78 yards to put the Eagles up 14-0 with 7:44 left in the quarter.
Hawthorne would later add a 35-yard run with 4:16 left in the quarter to put W.S. Neal up 20-0.
Brewton’s lone score came with 1:08 left in the game when Demarcus McMillan scored on an 11-yard run to cut the lead to 20-6. From there, W.S. Neal recovered an onside kick and ran out the clock for the 14-point win.
“The game tonight, I thought we played really hard on both sides of the football,” Phillips said. “It was a tough game. I give all the credit to Brewton. They are a good football team. They are very well coached and I think they brought the best out in us. Like I said, we did well on all facets of the game—offense, defense and special teams. Once again, I could not be more proud.”
Hawthorne led W.S. Neal rushing with 64 yards on three carries and one touchdown. Christian Wood added 38 yards on eight carries. Darius Williams had 21 yards on three carries.
Hutchins was 3-for-4 passing with 15 yards and one interception. Hawthorne was 1-for-1 was 11 yards and a touchdown to Hutchins.
For Brewton, Michael Campbell led in the rushing category with 73 yards on 14 carries. McMillan added 56 yards on 17 carries and had a score.
Drew Williamson was 3-for-5 passing with 15 yards. Demarious Luckey was the leading receiver with one catch for eight yards.
Brewton had three fumbles in the loss and lost two of them while W.S. Neal threw one interception.
In the 7th grade, one 10:00 running quarter, W.S. Neal won 20-6. Matthew Thomas found Hayden Winchester in the end zone for a 17-yard pass play for the lone score of the game.
T.J. Smith added 50 yards on three carries for W.S. Neal in the win. Thomas was 1-for-1 passing with a 17 yards and a touchdown to Winchester.
For Brewton, Demonte Jenkins had 24 yards on four carries and Tailand Mitchell had 23 yards on five carries. Matt Smith was 0-for-1 passing.
Brewton will end their season Tuesday with a road game at Earnest Ward.