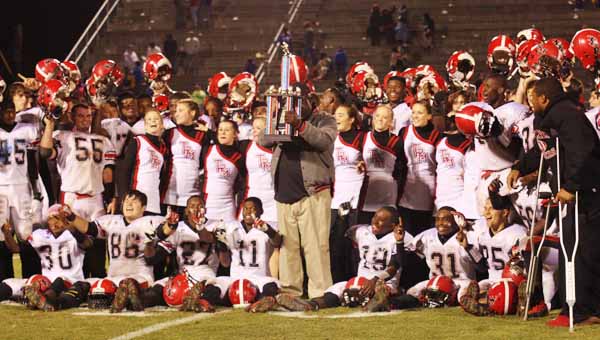 Depth, defense and a dominant running game for the T.R. Miller Tigers keyed a 28-0 rout of the W.S. Neal Eagles Friday night in another installment of the annual Battle of Murder Creek game.

Leading only 7-0 after the first quarter and at the halftime break, T.R. Miller scored a touchdown in the third quarter to take a 14-0 lead over the Eagles of East Brewton. TRM carried the 14-point lead into the fourth quarter.

From there, the Tigers used an interception return for a touchdown to grab a 21-0 lead and added the final touchdown of the game with 5:10 left to play to seal the 28-point win and regain the Battle’s trophy after falling to the Eagles last year in Brewton.

“We made three critical errors in the first half that kept us from scoring then I made a boneheaded play down there when we spiked the ball on fourth down,” T.R. Miller head coach Jamie Riggs said. “To the credit of our team, we got our act together in the second half and scored. The key to the second half was we did not give them any big plays.”

“They are a very good football team,” Hoehn said of T.R. Miller. “We just didn’t help ourselves with the turnovers. Our turnovers led to two of their scores, but our kids played hard.”

TRM finished with 331 yards of total offense with 268 coming on the ground on 51 carries. The Tigers had 19 first downs.

WSN was held to 108 yards of total offense, all coming on the ground on 24 carries. The Eagles had only three first downs.

TRM had no turnovers in the win while WSN threw two interceptions and had one fumble.

Dominique Jackson led TRM rushing with 111 yards on 16 carries and had one touchdown.

McHenry Coleman and Kieon Smith had scores for TRM while Kellyn Winn had an interception return for a touchdown.

For WSN, Malcolm Hawthorne was the leading rusher with 59 yards on nine carries.

TRM limited WSN’s Quenton Samuel to only 40 yards on 11 carries.

TRM will end their regular season next week on the road at Sweet Water while WSN will host Millry.

The win in the rivalry game for the Tigers improved them to 50-21 all time against WSN.

Hoehn fell to 1-2 against TRM.