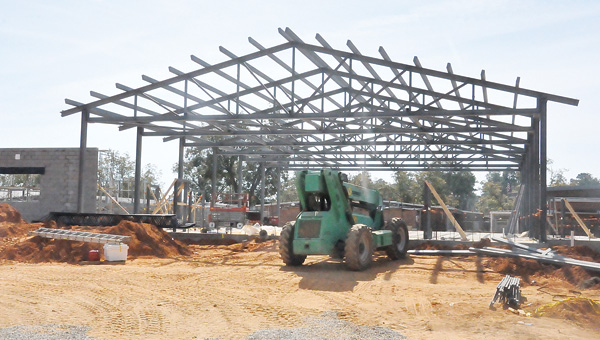 The walls are going up at the new T.R. Miller High School classrooms, and construction is on schedule.

Superintendent Lynn Smith said he expects workers to be able to put the roof trusses up soon, which will help keep the new buildings secure and safe from the elements.

“They’re doing a nice job up there,” Smith said.

T.R. Miller’s construction will be done in two phases — the first, new classrooms that will be open in time for the fall 2014 semester, and second, new offices, a media center and distance learning that will be open the following year.

The project, which is smaller in scale than the new Brewton Middle School, is being financed by Trustmark. The middle school was paid for with a bond issue.

While construction has been going on, there have been few disruptions for students, Smith said.

The project has allowed the city school system to essentially build a new high school in the same location. The existing gym and auditorium will remain.

A ground-breaking is set for 10 a.m. Thursday for the new W.S. Neal High School.