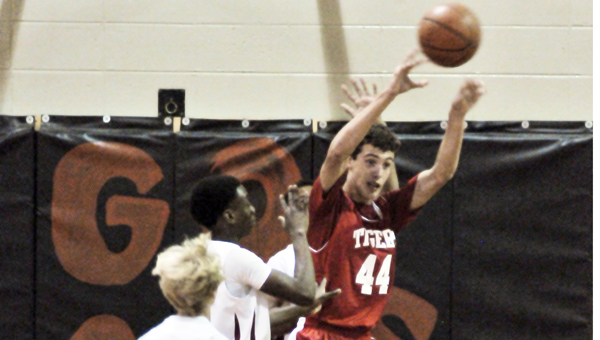 In their 2013 season opener on the road against Andalusia Middle School both basketball teams from Brewton Middle School took losses.
The Brewton Middle School Lady Tigers lost 20-19 while the boys team took a 34-18 loss.
With the losses, the Lady Tigers start their season with an 0-1 record while the boys began with an 0-1 record as well.
Brewton’s teams will be back in action Monday at home when they W.S. Neal Middle School. Game time is set to begin at 4 p.m. with the girls game being played first followed by the boys.
The game will be the first of the season for the Eagles of East Brewton.

Andalusia 20, BMS Lady Tigers 19
In girls action Tuesday night in Andalusia, the Lady Tigers rallied but were edged out by one point as they started the season with a 20-19 loss.
Brewton trailed Andalusia 3-2 after one quarter of play at trailed 7-6 at the halftime break after both teams scored four points each in the second quarter.
In the third quarter, Brewton was held scoreless while Andalusia poured in nine points to increased their lead to 10 points, 16-6, heading into the fourth quarter.
In the fourth, Brewton rallied with a 13-4 advantage but came up one point short.
Malaysia Campbell had four points four Brewton and Breonna Dees had four while Kyla Bell had five points to lead Brewton. Karmaiya Jenkins had four points while Morgan Longmire added two points.

Andalusia 34, BMS boys 18
In the first game of the season Tuesday night for the Brewton Middle School boys basketball team, the Tigers took a 16-point loss, 34-18, to Andalusia Middle School.
Andalusia led Brewton 10-3 after one quarter of play and outscored the Tigers by the exact score in the second quarter to grab a 20-6 lead at the half.
In the third quarter, the Bulldogs of AMS matched their 10-point scoring again as they outscored Brewton 10-6 to increase their lead to 30-12 heading into the fourth quarter.
In the fourth, Brewton edged out Andalusia 6-4, but took the loss by 16 points.
Josh Jolly led Brewton with nine points while Stokes Jennings and Demonte Jenkins both added three points each. Joseph Nance chipped in two points and Hayden Atkinson had one point in the loss.